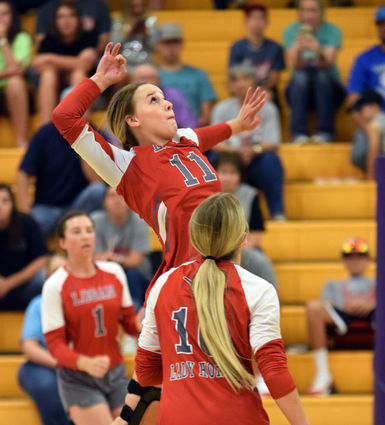 Logan's Karli Webb jumps and winds up for a spike attempt Saturday evening in the title match against Floyd at the Tucumcari Invitational volleyball tournament. Webb was named Most Valuable Player of the tourney. In the foreground is Jordan Hines; in the background is Kassi Foote.

Hard-hitting Logan dominated Floyd 25-16, 25-14, 25-12 in the title match Saturday of the Tucumcari Invitational volleyball tournament at the Snake Pit.

Karli Webb, who had 13 kills and four serving aces for Logan (7-0) during the championship, wa...