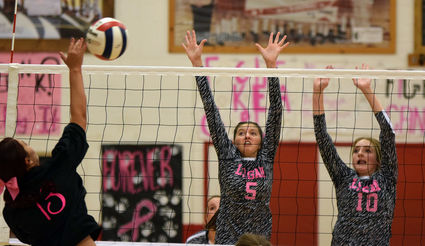 Meanwhile, the visiting Lady Bronchos saw their chances for a district crown dim markedly with their second straight league loss. Grady/San Jon fell to 6-8 overall, 0-2 in the district.

Both are chasing No. 1-ranked Melrose, who improved to 13-0 overall and 4-0 in district play by week's end.

Logan, ranked No. 2 in Class 1A by MaxPreps.com, improved to 14-2 overall and 3-1 in the district, with both of its losses to Melrose.

Grady/San Jon coach Rebecca Burns knew her team needed a good performance Thursday against the defending Class 1A champion and didn't get it.

"I thought we were pretty well prepared yesterday," Burns said. "I don't even know if we got off the bus. My girls, it was like a totally different team from how we played all week.

"We played really well Tuesday (in a loss) against Melrose. Today, we just didn't show up. We had too many errors. We had a lack of focus, no energy. If you do that against Logan, they're going to beat you pretty badly."

The Lady Bronchos seldom had a lead in any of the games against Logan. The Lady Longhorns consistently ripped off long scoring runs to leave little doubt about the outcome.

"I thought we played a solid game in most areas tonight," Logan coach Robert Young said. "We're still making some errors we need to improve on. But I thought we focused well and were more consistent than we have been."

Logan faces Melrose at home about 4 p.m. Saturday. A win by the Lady Longhorns likely would force a district-championship tiebreaker match at a neutral site, probably in Tucumcari.

"We had too many errors in that game," Burns said, "but some of the improvements we've been working on since the end of non-district play, we did really well against them. Our blocking was good; it helped us in a lot of areas.

"And the girls played hard. If the top team comes to your place, you want to play well. And I think they did."

The Lady Bronchos fell to 6-9 overall and 0-3 in district play.

The Vixens improved to 9-7 overall and 2-2 in the district. Fort Sumner is ranked 10th in Class 1A by MaxPreps.com.