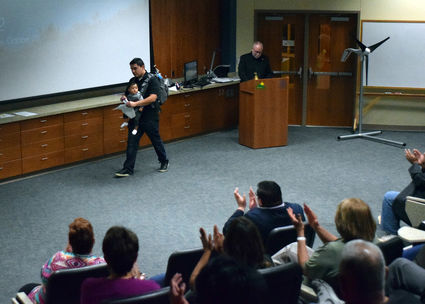 Audience members applaud after Victor Pacheco, an unopposed candidate for Tucumcari school board District 1, finishes his pitch with his infant son strapped to his chest during a candidates' forum Oct. 21 at Mesalands Community College. At right is moderator Patrick Vanderpool, executive director of the Tucumcari Economic Development Corp.

Those running for Tucumcari city commission listed infrastructure upgrades, attracting more jobs and working together as a community as among their priorities during a candidates' forum Oct. 22 at Mesalands Community College.

Another theme that emerged from most of the candidates - and reiterated by the Quay County clerk - was encouraging residents to vote for the Nov. 5 election.

Candidates from throughout Quay County were invited to the forum hosted by Rotary Club Tucumcari and moderated by Tucumcari Economic Development Corp. Executive Director Patrick Vanderpool. Candidates who showed up mostly were running for Tucumcari commission, plus a smattering of hopefuls for Tucumcari school board, Mesalands Community College board of trustees and Logan school board. A total of about 50 - candidates included - attended.

The format was each candidate had five minutes to explain why he or she was running. Vanderpool kept a clock running to inform any candidate if he or she ran out of time; none did.

The forum proved to be civil, with none of the candidates deriding their opponents in contested races.

Before candidates made their pitches, Quay County Clerk Ellen White explained recent changes in state law that consolidated area races. She said that has led to more than 50 different ballots for the election; she encouraged voters to go to NMvote.org to see what awaits them.

White also said it's important to cast a vote even for uncontested races if he or she is happy with that candidate's performance. If turnout for that uncontested office is low, she said, it opens the door much more easily for a future recall election that requires a small percentage of voters.

"It's very expensive and very easy to do (a recall) if not many people vote," she said.

Snapp, a Tucumcari native, admitted he didn't know all the city's problems and made no promises "except to do the best job I can as commissioner."

Snapp said Tucumcari needs to "come together." Drawing from Abraham Lincoln's "house divided" speech, Snapp said: "If we continue to go as a divided city, we will not stand." He urged voters to "remember to vote who will serve you best."

Moya, citing a prior commitment in Clayton, did not attend the forum but emailed his regrets and a statement Vanderpool read.

Moya's statement was nearly identical to his response to a Quay County Sun questionnaire. See the other story about city commission candidates in this edition for his full statement.

District 4 incumbent Christopher Arias said the city's issues are "complex but simple at the same time." He said the city and its residents need "to invest in ourselves ... ask for pride in ourselves" and "embrace the future."

"Our greatest assets are ourselves," he said.

Arias said education is the "No. 1 key to our success." He said the Municipal Officials Leadership Institute classes he's taking will make him a more effective official, and he would receive his certification on Election Day.

Arias said Tucumcari's cited problems - dilapidated buildings and weed-strewn lots - are not unique. He said conferring with other officials around the state will help find common solutions.

Arias' challenger, Renee Hayoz, didn't attend because of prior commitments but sent her regrets and a statement to Vanderpool.

Hayoz, whose family has lived in Tucumcari for generations, moved back here two years ago to help her ailing father and other relatives.

She stated she became motivated to run for commission after seeing "poor state of condition the city was in," and Tucumcari needs a jump-start in economic growth.

Paul Villanueva, a candidate for the city's District 2, said Tucumcari needs to repair its streets and offered his knowledge from working at the state DOT.

"It's pretty hard to have a nice car and have bad roads," he said.

Villanueva said the city needs to attract another grocery and clothing store, like it had in the old days. "I want to see our town grow," he said.

"I won't make empty promises - never have, never will," she said, insisting the city and residents "have to take baby steps" to improve conditions.

District 3 incumbent and mayor Ruth Ann Litchfield, who is unopposed, said she represents not jut one district, but the entire community. She said the city's budget has improved and satisfied the state auditor after poor previous audits.

Tucumcari municipal judge Noreen Hendrickson also is unopposed. A San Jon native, she cited her years in law enforcement and her insistence on using an available but unused computer system once she took office.

Jerry Lopez, a candidate for Tucumcari school board District 2, said the district is "in great hands" but "needs younger blood, new ideas, and I want to contribute to that."

Lopez also said residents in his district are overlooked because many are in poverty.

"I will bring their concerns to the table," he said.

Victor Pacheco, an unopposed candidate for the school board's District 1, gave a brief pitch with his 11-month-old son strapped to his chest in a carrier. He said he felt obligated to run because of his infant son, and he would "listen to people with ideas."

Jimmy Sandoval, an unopposed incumbent for District 2 for Mesalands board of trustees, made an admission about his younger self when talking about the value of education. He said the community in general "doesn't care much about education. I know, because I've been there."

Craig Currell, an unopposed incumbent for District 4 at the college, did not attend.

Toby Willis, a Position 1 candidate for Logan school board, said he ran "to give back" to the community "without agendas" and "to look out for our kids."

Edward L. Johnson and Kyle Don Perez, who did not attend the forum, are contesting Willis.

In Position 3 for Logan school board, Kene Terry, Susan Acosta and incumbent Bryan Roach are vying for that seat. Laurie Strebeck is unopposed for Logan's Position 2. None attended.

Other no-shows were candidates for House school board, San Jon school board and the Canadian River and Southwest Quay soil and water conservation districts.