Issues on tap at forum 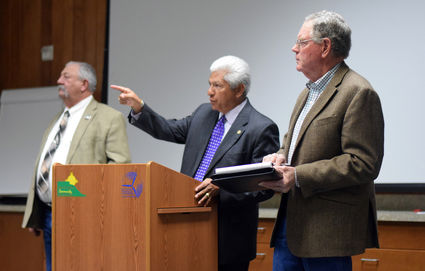 Ray Mondragon of the Eastern Plains Council of Governments points to a questioner during a legislative forum Wednesday at the North American Wind Research and Training Center at Mesalands Community College in Tucumcari. Flanking him are state Rep. Jack Chatfield, left, and state Sen. Pat Woods.

It's a good problem to have, compared to previous years.

Two area lawmakers talked Wednesday about the New Mexico Legislature being flush with money from oil and gas revenue and the tension between spending much of it and being prudent with the cash when lean times inevitably return.

The lawmakers and audience members that nearly filled a 65-seat auditorium discussed other issues - jobs, roads and a desire to revitalize Conchas Lake during a legislative forum at the North American Wind Research and Training Center at Mesalands Community College in Tucumcari.

Ray Mondragon, economic development and government affairs official for the Eastern Plains Council of Governments, and Patrick Vanderpool, executive director of the Greater Tucumcari Economic Development Corp., moderated the forum that featured remarks by Chatfield and Woods and a question-and-answer session.

Woods said about one-third of the New Mexico Legislature's revenue comes from oil and gas development in the southern part of the state. He noted the state's coffers are so full of money, it's been slow to use it all - partly by design.

"We put so much money out there, it couldn't be spent," Woods said. "It's sitting out there in holes and not able to be used. There's a lot of hoops, and we want them to spend it wisely."

Woods explained some of money will be used to improve roads in southern New Mexico because its current two-lane highways are clogged with trucks going to and from the oil patch. But it will take up to three years for that money to be spent because of the required engineering and planning.

Woods also said spending for early childhood development will rise from $68 million to a projected $120 million by 2021.

The senator said the Legislature should be mindful of recurring expenses, especially when economic hard times return. He noted oil-rig counts are down, and the ample oil and gas production that results from fracking tends to decrease over time. These factors may mean less future revenue.

He advocated a rebate to New Mexico taxpayers if the money isn't spent but acknowledge such a proposal faces tall hurdles from lawmakers.

"That's sometimes the mentality of the Legislature: 'We know better than y'all do,'" he said.

Woods also said lawmakers should be cautious about adding statutes.

"How many people want to live under more laws?" he said. "We can be so confined that it restricts business."

In an admitted aside, Woods said the United States is "a Christian nation" and cited constitutional rights "given to you by your creator."

"I believe a majority of people believe in God," he said. "I believe in the moral compass to do right. ... I don't believe we're in an abyss."

Chatfield noted the legislature earlier in the year had a $7 billion budget for the first time and has more than $900 million in capital outlay requests.

Chatfield said he too would push for more road-construction money for eastern New Mexico, and he wants the state's film-incentives money to be spread around instead of centered in Albuquerque.

"I'd like to see some of that money here," he said. "If they're going to give money, let's make movies in Tucumcari."

Chatfield also said he wants more health services returned to rural areas instead of those patients having to travel to Santa Fe or Albuquerque for specialized medical treatment. He also advocated fewer regulations, especially with reusing old buildings.

During the question-and-answer session, several residents expressed their wishes for more development at Conchas Lake, which sits in San Miguel County but remains strongly linked to Tucumcari and Quay County.

One resident noted the state had removed a dock, and the lake lacks a gas station, concessionaire or restaurant. He said one state official told him nothing was planned for the lake.

"That's kind of a bunch of bull," Woods said in response.

Other residents, including Quay County commissioner Sue Dowell, said the Army Corp of Engineers held meetings in Tucumcari two years ago to get public input about the lake, but nothing has happened since. She said she feared the corps' recent request for public input about the long-closed Conchas Lodge might result in similar inactivity.

"Someone needs to set a fire under them," she said.

Woods and Chatfield pledged to give Conchas Lake more scrutiny.

Tucumcari city commissioner Todd Duplantis said he wished lawmakers would advocate more for incentives for long-term employers locating to Tucumcari instead of filmmakers who come to town for a production, then leave.

"Movies are temporary," he said.

Vanderpool noted the annual Quay Day will be Jan. 22 at the Inn at Loretto in Santa Fe, the day after the legislative session resumes at the Roundhouse.

Before the forum, Mondragon led a moment of silence and prayer for Tucumcari resident Ron Wilmot, a longtime aide to U.S. Rep. Ben Ray Lujan, who died earlier in the week.