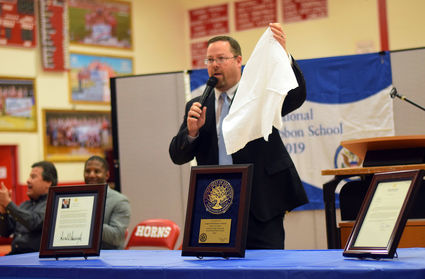 LOGAN - Hundreds of students and several state and local officials gathered Thursday morning in the high school gymnasium for a celebratory presentation of the 2019 National Blue Ribbon School of Excellence award to Logan Elementary School.

Ryan Stewart, New Mexico's secretary of education, said of 900 schools in New Mexico, Logan was one of only three to receive the Blue Ribbon honor, announced in September.

"It's not just an honor for the school, for the state," he said. "You've joined a very select group of the best of the best."

Stewart, visiting the school district for the first time since he took office in August, gave his impressions of the Logan district after the ceremony and a brief tour.

"It is so amazing to see the culture that has been built," he said, "and the pure excitement and connection you see between the students, the teachers and the administrators. It really is a community atmosphere. You tell why everyone's so committed and inspired to achieve."

Logan Municipal Schools superintendent Dennis Roch said the award isn't easy to achieve. Not only does it laud high-performing schools, but those that also show improvement, he said.

"I think the big difference is the teachers have really decided to embrace the concept that instruction needs to be student-led, relevant and hands-on," Roch said. "It's beyond the textbook. When you make learning relevant to the students, tied into their own life experiences, it sticks and it really helps prepare them for the next level."

Elementary Principal Crystal Burns, after introducing each of the school's teachers and their aides to rounds of applause, said the plaque, letters and Blue Ribbon banners would be displayed in the school's cafeteria to show students what they've achieved and remind them to keep striving.

State Sens. Pat Woods (R-Broadview) and Pete Campos (D-Las Vegas) and state Rep. Jack Chatfield (R-Mosquero) gave congratulatory remarks. Campos punctuated his with a drawn-out and bellowing "The Logan Longhorns" salute as if he were at a pep rally.

Roch noted Woods and Chatfield served as school board members before turning to politics, and Campos had been a school superintendent and educator.

Also in attendance were representatives from the Quay County commission, village of Logan and Logan school board.

A total of 362 schools in the U.S. earned the National Blue Ribbon Award this year.

The recognition is based on a school's overall academic performance or progress in closing achievement gaps among student subgroups, the U.S. Department of Education stated in a news release. The program is in its 37th year.