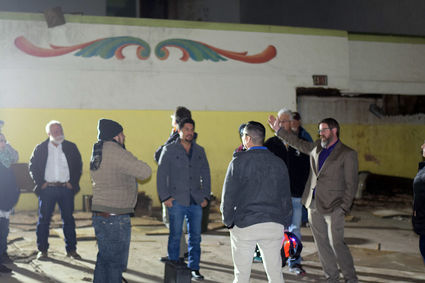 Tucumcari City Manager Britt Lusk points out a feature Thursday inside the closed Princess Theatre in downtown Tucumcari to two Santa Fe filmmakers who are considering renovating the city-owned property. The theater's balcony is in the background.

Two people from a Santa Fe filmmaking company who expressed interest in redeveloping the long-closed Princess Theatre in downtown Tucumcari took a tour inside the dilapidated structure Thursday afternoon with city officials.

Using floodlights brought in by the Tucumcari Fire Department and their cellphone flashlights, they gingerly stepped around rotted flooring, fallen ceiling tiles and strewn seating while exploring three levels of the century-old theater. Parts of the ceiling and chandelier also had collapsed. The city-owned building received a new roof two years ago to slow further deterioration, however.

City officials and the two filmmakers seemed fascinated by aspects of the property, including its colorful wall murals, vintage fixtures and even a rotary pay phone in one room.

Joe Dean, a principal with the Santa Fe-based Lumenscapes film company, acknowledged the theater was "run down" but wasn't discouraged.

"This place is in sad shape right now," he said. "But I'm still optimistic about this project. We're hoping to put together a proposal to renovate and bring some life into this old space."

When asked about the proposal, Dean said: "The idea would be to create an attraction and late-night spot for Tucumcari. We would show films on occasion, it would be a special-events venue and a destination attraction."

When asked to elaborate on the attraction, Dean demurred but said it would be "an experience you couldn't get anywhere else in town."

During a city commission meeting in October, Mayor Ruth Ann Litchfield and city commissioner Ralph Moya said Dean had expressed interest in developing the theater over three to five years into a café in front, with a museum and movie theater behind the café.

Litchfield said live drama is another possibility, due to a proposal to create a touring theater group that would rotate productions among Tucumcari, Taos and Santa Fe.

Moya had said the cost of renovating the Princess would be about $1.1 million.

Some have played up the fact Dean has done work with the popular Meow Wolf museum and gallery in Santa Fe, but Dean on Thursday downplayed it, noting he is "one of 300 artists" that have collaborated with Meow Wolf and is "definitely not a business partner" there.

One of Dean's partners, Elias Gallegos, accompanied him on the Princess tour and said he was scouting for film locations, with the theater as a possibility - especially for a post-apocalyptic movie.

The theater, which contained nearly 800 seats, originally was called the H-H Theatre when built in 1917, named after creators Arch Hurley and Gene Hawkins. Hurley assumed complete ownership in 1921 and renamed it the Princess Theatre in 1937.

A fire in 1943 gutted the theater's interior, forcing Hurley to rebuild. The theater closed for good in October 1962 after another fire broke out on the roof.