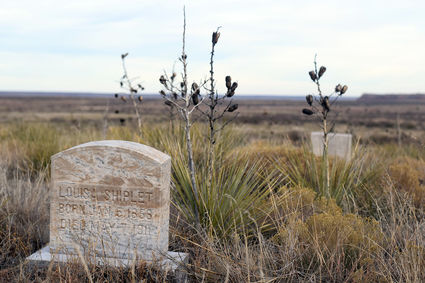 The Anniston Cemetery, which overlooks a hill near Highway 469 north of San Jon, remains the only evidence of the long-vanished town of Anniston. Quay County once counted about 80 towns during a boom-and-bust period about a century ago.

On a wall of the Quay County Clerk's office hangs a 1964 map of ghost towns in New Mexico.

The New Mexico Bureau of Mines and Mineral Resources compiled the map, of which copies are available from the office for a fee. In Quay County, the map shows about 20 ghost towns that might be unfamiliar even to longtime residents - towns with names such as Tipton, Revuelto, Canode, Adberg, Ard and Hanley.

It turns out the map far underestimated the number of defunct settlements in Quay County.

An examination of old and new maps, genealogy records, postal records, newspaper archives and local history books indicates the number of ghost towns in Quay County totals at least 80. And many of these villages disappeared more than a century ago. (See accompanying list.)

That many towns staggers the imagination when one considers the current day, when Quay County has just one city - Tucumcari - and only the villages of House, San Jon and Logan, plus one U.S. Census-designated place, Nara Visa.

Many longtime Quay County residents think the ongoing population drain began about 50 to 60 years ago. But the county experienced a boom-and-bust a century ago from which it never completely recovered.

Little traces exist of many of these ghost towns, but evidence of former settlements can found if you know where to look.

White settlers existed in what now is Quay County since the 1850s in part because it laid on a caravan route between Santa Fe and Fort Smith, Arkansas. The region's population boom didn't occur until after the federal government opened up 5 million acres in New Mexico for settlement in 1902.

Sharecroppers, rental farmers and homesteaders looking to stake a claim flooded into the county. According to the U.S. Census, Quay County's population was 14,912 in 1910, just a couple of years before statehood.

Local history books noted many of the county's new residents were farmers from the Midwest that were not prepared to deal with the region's arid climate. Many of those homesteads became abandoned less than a decade after they arrived.

While Quay County saw some population recovery up through the 1950s before declining again, it never again reached its 1910 peak.

Other towns also withered when new railroad lines bypassed them, prompting residents to move closer to the tracks.

An article in the Tucumcari newspaper in 1908 mentioned the county contained 86 school districts.

The article also stated the number of schoolchildren in the county ballooned from 320 in 1903 to more than 6,200 by 1908 - more evidence of the flood of new residents.

Many of those closed schoolhouses have disappeared. The Wheatland school and gymnasium, constructed by the Works Progress Administration in 1939, still stand, as does McAlister's school.

One of the best preserved is Quay School, south of Tucumcari. Closed in 1955, it then was used for class reunions and other social events, but the last gathering was years ago.

However, one can easily imagine children frolicking on its playground after spilling out its front doors.

A one-room, wood-framed schoolhouse still stands as the only apparent survivor of the ghost town of Frost, with its slate blackboard still affixed on the length of one wall. The school closed in 1921. It sits near the Bard-Endee fire station on Highway 392, east of another ghost town, Porter.

Another piece of evidence of the number of former settlements is post offices.

A perusal of that list shows many post offices went defunct before 1920, an indication of the rapid demise of many settlements or their consolidation.

One settlement, Brown, is listed as having a post office only from May 9, 1910, to January 1911 with the notation: "Never in operation."

A few ghost towns still display evidence of their former vibrancy through the ruins of former businesses.

The old store at Ragland, closed since the 1960s, sits along Highway 209 as the road descends from the caprock.

The stone walls of the Porter Store in Porter continue to stand along Highway 392 after it closed decades ago.

Though a general store along Highway 252 in McAlister closed years ago, it is in good enough shape that one could imagine it reopening tomorrow.

Yet another indication of a former town is cemeteries. Where a town has disappeared, a nearby graveyard provides tangible evidence of its former residents.

One striking cemetery is Montoya's along Route 66, which contains many graves decorated with keepsakes and Catholic saints - reflecting the town's former Spanish-speaking population.

Anniston Cemetery, near Highway 469 north of San Jon, remains about the only evidence of the Anniston settlement. The graveyard sits on the side of a peaceful slope about a half-mile down a down a dirt road.

Some towns proved indecisive on what name to settle on.

Amego also was known as Amigo or Ahmigo before changing to Lockney.

The small settlement of Lesbia, southeast of Tucumcari, once was known as Castleberry.

Ragland, south of Tucumcari, formerly was known as Caprock.

Montoya once was known as Roundtree or Rountree.

One of the strangest name changes occurred when Looney postmaster Emma Stephenson, who disliked the town's name, in 1913 petitioned U.S. President Woodrow Wilson to change its name to Woodrow. Her petition was granted.

A few ghost towns didn't stay in one place during their histories.

Endee, which remains one of the oldest settlements in Quay County, moved at least four times.

In almost all cases, these towns moved because there was a more advantageous and potentially lucrative site nearby - a new railroad line in the early 20th century or the new U.S. 66 during the 1920s and '30s.

In short, they went to where the action was.

Montoya holds the additional distinction of its Richardson Store, which operated from 1908 to 1980, being listed on the National Register of Historic Places. The long-closed building collapsed a few years ago, but tourists who travel Route 66 still stop to photograph it.

The main old Route 66 drag of the Texas-New Mexico border town of Glenrio, now holding fewer than 10 residents, has been listed on the National Register of Historic Places since 2007, despite the fact its motel, gas stations, post office and even a bar haven't been open for many years.

Writers and tour operators long have described Glenrio as a Route 66 ghost town - a symbol of what happens to some once-prosperous settlements when they're bypassed by the interstate.

A notice about a county Republican convention in a 1910 Tucumcari newspaper listed 36 voting precincts in Quay County, including about 30 in now-depleted or defunct towns.

Tucumcari fielded seven delegates for the convention, and Montoya and Nara Visa each had three. Orton, Jordan, Murdock and Obar each had two.

The convention's purpose was to select five Quay County delegates for a constitutional convention in Santa Fe.

A few now-depopulated towns once saw considerable success with their local sports teams.

The Porter Dragons, for instance, long were known as district contenders in boys basketball until the school went defunct in 1955.

But that success pales in comparison to the Forrest Pirates, which won state championships in boys hoops not just once, but twice. Coach W.S. "Bill" Wilson led his teams to state titles in 1931 and 1933, according to official records kept by the New Mexico Activities Association.

What's most impressive about the squad's accomplishments is they did it before New Mexico high school started a two-class system in the mid-1950s. That meant Forrest defeated far bigger schools en route to their championships.

• Mater (aka Mater Switch): a few miles southwest of Logan