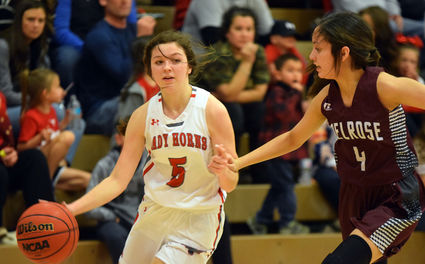 Logan's Chesnee Day dribbles up the court against Melrose defender Johanna Roybal during a district game Thursday at Logan.

LOGAN - Senior power forward Karli Webb scored 11 of her game-high 31 points in the fourth quarter to rally the top-ranked Logan girls basketball team to a come-from-behind 54-47 district victory Thursday over No. 2 Melrose.

The Lady Longhorns, ranked atop the MaxPreps.com and coaches polls in Class 1A, improved to 15-3 overall and 2-0 in District 6. Kyndall Ragland added 10 points for Logan.

Melrose, which had been ranked No. 1 until Logan defeated it in double overtime at the EPAC Tournament earlier this month, fell to 13-3, 1-1. Johanna Roybal scored 14 points to lead the Lady Buffaloes, including four 3-point shots, and Shannon May added 12.

"We're still not where we want to be yet as far as working together and gelling as a team," she said. "But we're closer than we were when we played them at EPAC. We're getting better on defense. We've been working on that a lot in practice. And I thought our hustle was good."

The key moments of the game started early in the fourth quarter with Melrose nursing a 38-35 lead. In less than three minutes, Logan scored 11 unanswered points. Nine of those came from Webb, including a 3-pointer that prompted a timeout from Melrose coach Caleb King. Ragland also scored after an offensive rebound during the rally.

The Lady Buffaloes also hurt themselves by missing four straight free throws in the quarter.

"You could tell they had a little more leadership from their older kids," King said. "We couldn't execute near the end, and they did. They got a couple of screens we didn't call out, and they got a couple of easy layups. When you make those mistakes down the stretch, it's going to cost you a game."

Strand also said it was a lack of poise - especially against Melrose's press to start the third quarter - that hurt her team after it held a lead the entire first half. Three straight turnovers and a Roybal 3-pointer fueled a 29-26 Melrose lead.

"We had a moment where we lost our heads," Strand said. "When they saw them scoring, they lost it a bit and started to panic. I called a timeout and told them: 'Calm down. Play your game.'"

"I'm going to tell the kids to keep working hard," King said. "We've got to fix the small stuff and not lose our confidence. We've got to beat them in the small areas, because we're not going to be them with our size."

The Lady Longhorns survived a non-district challenge at Texico during a 48-44 victory Saturday.

Strand said her team didn't play well and added: "Key moment was the sigh of relief at the end that we got a 'W.'"

Grady/San Jon fell behind by double digits in the first quarter and was overwhelmed 61-19 in a district game Saturday at Fort Sumner.

The Lady Bronchos scored just 10 points in the first half and were held scoreless in the third quarter.

"We haven't figured out that we have to practice like a champion every day," Grady/San Jon coach Alicia Rush said. "We played liked we practiced yesterday."

Grady/San Jon's comeback attempt in the second half fell short during a 53-47 district-opening loss Thursday at Clovis Christian.

Rush said her team trailed by 16 points at one point but cut it to four.

"My eighth-graders, Shayla White and December Garza, were difference-makers for us," she said. "They played really well. Bailey Montoya worked hard to stop DeGroot. I was missing two starters to injury and sickness."