Tucumcari Farmers Market to be honored 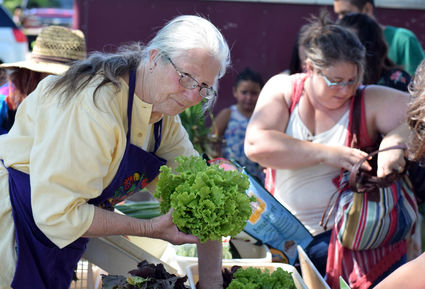 Linda Gunkel of the God's Garden stand sells a head of lettuce to a customer during the Tucumcari Farmers Market in July in Wailes Park.

The Tucumcari Farmers Market will be honored Thursday as the Farmers Market of the Year during the eighth annual New Mexico Food & Farms Day and School Nutrition Day Awards in Santa Fe.

The ceremony recognizes contributions to and participation in New Mexico's local food and farm to school programs. It will be from 9 to 10 a.m. Thursday in the rotunda of the state Capitol. The Tucumcari market beat out four other nominees for the award.

According to a news release from the New Mexico Department of Agriculture, the free event celebrates "continuous statewide effort to expand and strengthen connections between New Mexico's local food and education system."

Sandra Groves, who has managed the Tucumcari Farmers Market at Wailes Park for the past four years, said last week she was "shocked" by the award.

"We're a little, tiny market out in the middle of nowhere," she said. "I'm very pleased the market is getting that kind of recognition."

Groves said the market has grown in the number of vendors and customers in the last few years. Almost 400 people attended the market during its opening day in July.

"I think people have finally realized buying local, knowing who you're buying from, really helps," she said. "My vendors have done very well because of that. And we do have a lot of fun at the market."

Groves said she would be unable to attend the awards ceremony. She said one of her vendors, Philip Box, likely will accept it on her behalf.

Kendal Chavez, farm-to-school specialist at the New Mexico Public Education Department, stated in an email market nominees "should demonstrate a commitment to land and culture, innovative and creative approaches to complex problems and an investment in creating healthy food, a healthy economy, and a sustainable future for New Mexico."

Nominees also were judged on their commitment to community and local culture, a great shopping environment to buy local food, a sense of community through the shopping experience and a providing equitable food access through the acceptance of Fresh Rx, Senior Farmers' Market Nutrition Program checks, food stamps and Double Up Food Bucks.

The other award winners are:

• Organization of the Year: Agri-Cultura Network

The Tucumcari Farmers Market typically opens for the season in July and runs twice a week into early November.