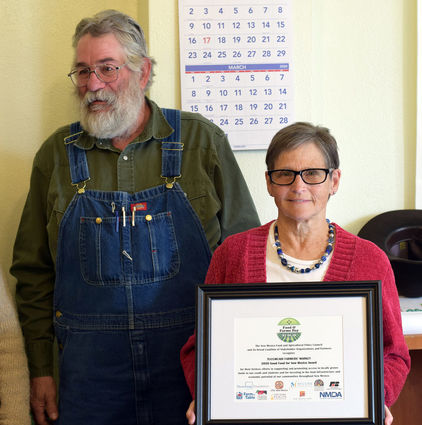 Quay County Commission Chairman Franklin McCasland during the commission's meeting Monday congratulated and recognized the Tucumcari Farmers Market for the Farmers Market of the Year award it received last week at the state Capitol.

Market vendor Philip Box was among those who accepted the award on manager Sandra Groves' behalf last week. Several other associates with the market attended the county commission meeting Monday.

Groves, carrying the award, credited vendors for the Tucumcari market's success, noting they come from even far-flung Quay County communities such as Nara Visa and House.

McCasland said he has been impressed by the size of the crowds at Wailes Park when the market is open during the season.

In other business by the commission:

• Because of a growing problem with feral hogs in the county and other areas across the United States, New Mexico Department of Agriculture wildlife specialist Aric Costa said the department recently acquired an airplane pilot so Costa can shoot at the hogs and other pests from the aircraft as soon as next week.

Coyotes had bedeviled livestock producers in the county for generations. But Costa's report showed the department had killed 81 hogs in the most recent six-month period, compared to 36 coyotes.

Costa said the department would try to find a second pilot for aerial pest control. Feral hogs long have been documented as destructive to natural ecosystems.

McCasland asked Costa to report on the effectiveness of its aerial pest-control program within three months.

• Commissioners approved a cost-of-care contract with Bernalillo County to house Quay County juvenile delinquents at a cost of $225 a day.

While the cost of incarcerating juveniles keeps rising, county manager Richard Primose noted the number has dropped in recent years. He said Quay County's annual cost for other counties to house its juveniles fell from $100,000 a few years ago to currently $50,000.

Primrose said the state also has consolidated its juvenile facilities. It once had 14, and the number has fallen to six.

• The commission approved a resolution for a fiscal-year budget increase to reflect a recently received state grant. A total of $50,000 will be spent on an engineering study for a proposed road from 12 Shores Golf Course to U.S. 54 near Logan. The state is paying for half the cost, plus one-quarter from the county and one-quarter from the Village of Logan. The road would cut commute times from the golf course and other nearby residences.

• County road superintendent Larry Moore said the county recently received its state grant of more than $3 million and a match waiver of more than $162,000 to replace a 1930s bridge on old Route 66 over Trujillo Creek between San Jon and Endee. More said surveys, engineering reports and environmental assessment still need to be finished before the county advertises for bids on the project.

• C. Renee Hayoz, administrator of Presbyterian Medical Services, said the clinic recorded 379 patient visits in January, just below its recently lowered goal of 400. Hayoz said the clinic's new retinal scan camera had been put into service, and the device identified one patient with diabetes risk.

• In response to a resident's recently complaint of littering by truckers at the county's Interstate 40 exits, especially at Palomas, Primrose said the state Department of Transportation's maintenance crews would monitor the site more. He said sheriff's deputies would write citations to litterbugs caught in the act and would contact state police to see whether they could assist.

• Dowell said a person in the county was considering a run for state senate but was daunted and confused by its filing requirements. County Clerk Ellen White said she recently printed a candidates' guide at her office and would work to provide thumbnail information for prospective county and state candidates via social media. The filing date for such candidates is March 10.

• Primrose said the county courthouse would be closed Monday for Presidents Day.

• Commissioners went into closed executive session to discuss threatened or pending litigation and the purchase, acquisition or disposal of real estate or property rights.