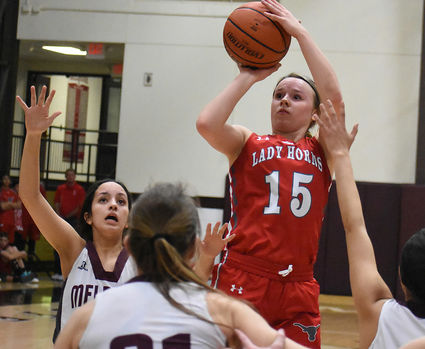 Logan forward Karli Webb goes up for the jumper in Thursday's District 6-1A game at Melrose. The Lady Horns' 51-49 win was the third against Melrose, which is 9-0 against the rest of Class 1A so far.

MELROSE - The Melrose and Logan girls basketball teams expect to see each other multiple times between Thursday and the conclusion of the season, and possibly for the Class 1A championship.

But as much as both teams appreciate and respect the other, they're admittedly tired of seeing each other, and crossing one potential meeting off the list was a victory in itself.

With a big fourth quarter from Karli Webb, the visiting Longhorns rallied to claim a 51-49 victory and eliminate any chance of a tiebreaker game in the District 6-1A tournament.

"It's fantastic," Logan coach Glynna Strand said after a fourth quarter that featured three lead changes and two in the final 80 seconds. "It takes a load off of us, honestly. You could have a tiebreaker game, then the district championship, then the tournament. This at least eliminates one of them."

With Webb scoring nine of her team-high 15 points in the fourth, the Longhorns (19-3, 5-0) remained perfect in district play and have accounted for three of Melrose's four losses with Thursday's nailbiter and a pair of seven-point wins at the Eastern Plains Athletic Conference title game and two weeks ago in the first district matchup at Logan.

Melrose (15-4, 2-2) also fell to Class 4A Bernalillo in the Alice King Tournament in December and has won all nine of its contests against non-Logan 1A schools.

Melrose coach Caleb King said "not having to play the same opponent 1,200 times" with the tiebreaker out of the way was some solace after falling in a game both teams had chances to win late.

"They did a good job sagging off of the driving lanes and making us make plays," King said.

Webb eliminated a 40-36 Melrose lead in the fourth, hitting a pair of threes as part of an 8-2 run to start the quarter and then the traditional three-point play on a baseline layup to break a 44-all tie with 5:23 to play.

With Logan up 51-49 in the closing seconds after a three-point play by Jordan Hines, Webb stole an underneath pass. She missed both of the ensuing free throws, and Melrose got a pair of attempts in the final nine seconds by Brette DeVaney and Shannon May that Logan defended just well enough to force misses.

King lamented not being able to get an early five-point lead stretched out more to make a potential Logan comeback tougher.

"We had Hailey Martin and Nataley (Mondragon) in foul trouble," King said. "It's a hard thing having both of them out. You can't build on a lead."

The Lady Longhorns continued to cruise through their District 6 schedule by crushing visiting Clovis Christian 62-12 on Saturday.

Webb scored 22 points to lead Logan, which improved to 20-3 overall and 6-0 in district play.

The visiting Vixens turned a relatively close game into a blowout Thursday with a 21-2 third quarter against Grady/San Jon.

The Lady Bronchos trailed 24-17 at intermission when Fort Sumner went on its big run.

"We came out flat in the third," coach Alicia Rush said. "We are trying to focus on our fundamentals; shooting is a sore spot for us every game."

Fort Sumner, ranked third in Class 1A, improved to 17-6 overall and 4-2 in district play.

The Lady Bronchos fell to 6-13 overall.