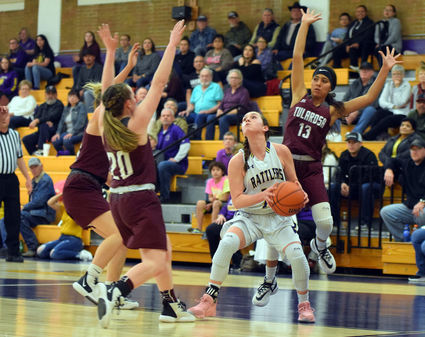 Tucumcari's Reece Goldston makes a move toward the hoop while being defended by Tularosa's Shacie Marr (20) and Hailey Zamora (13) during a district game Friday at the Snake Pit.

The Tucumcari girls basketball team avenged a previous loss and downed Tularosa 56-46 Friday at the Snake Pit to force a tie-breaking game to decide the top seed in this week’s district tournament. The Lady Rattlers, however, lost the subsequent tiebreaker game Monday against the Wildcats.

On Monday night, Tularosa defeated Tucumcari 65-58 in the tiebreaker at a neutral site at Dexter, giving the Wildcats the top seed in this week's district tournament. Tucumcari (16-10) hosts third-seeded Dexter (16-10) at 6 p.m. Wednesday. The winner goes to Tularosa (21-4) for the district title at 6 p.m. Friday.

Thanks to Shipley’s two 3-pointers and two free throws Friday, Tucumcari raced to an 8-0 lead and grabbed a double-digit advantage at the end of the quarter when she sank another 3-pointer at the buzzer. Save for a brief run in the second half, Tularosa never threatened after that.

“We came out and played,” Tucumcari coach Gary Hittson said of the victory. “We worked on a lot of their stuff since the last time we played them. We kind of knew what they were going to do, so that helped.”

Tularosa coach Thomas Mulkey said his team suffered from a poor shooting night that snowballed Friday, including a woeful 5-of-14 from the free-throw line. Tucumcari, in contrast, made 20 of 25 foul shots.

“It’s basketball; you have to put the ball in the basket if you’re going to win,” he said. “We didn’t do that tonight. We’re averaging 60-some points per game. When you get the ball inside and you’re not making layups, there’s a little bit less confidence with the next shot you take.”

The Wildcats whittled the lead to 28-24 early in the third quarter with strong inside shots. Tucumcari senior center Jasmine Jones responded with seven unanswered points, and Julie Rivera sank an inside bucket to put their team up 39-24.

Jones totaled 17 points despite suffering a knee injury against Dexter earlier in the week.

“She toughened up and went for it” in Friday’s game, Hittson said.

Tucumcari senior forward Aaliyah Brown also went down with a knee injury late in the second quarter and spent much of the rest of the game with bags of ice on the joint. Though she briefly limped back onto the floor late in the fourth quarter, her playing status remained unknown for this week’s district tournament.

Tucumcari’s lead swelled to 20 by early in the fourth quarter with the help of a 3-pointer from Reece Goldston and free throws from Alexus Lafferty.

Tularosa suddenly got hot behind the 3-point arc, swishing four treys in the waning minutes make the game look closer than it was.

Shipley scored 34 points to lead the way in a 63-33 pasting of Dexter during a district game Feb. 18.

Shipley also totaled a team-high 15 rebounds and five assists during the game.

Jones totaled six points and six rebounds before exiting the game in the second quarter with an injured knee.

Tucumcari led 28-13 at intermission and salted the game away with a 24-6 third quarter.

“It was a sloppy game, with both teams turning the ball over a lot,” Hittson said, noting Tucumcari’s 24 turnovers.