No games or practice until at least April 6 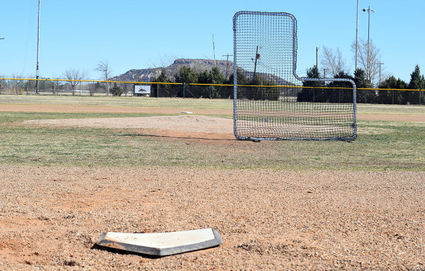 A deserted baseball field in Tucumcari is seen Saturday after the cancellation of all classes and athletic practices at New Mexico public schools through April 6 because of the ongoing coronavirus pandemic.

The mandatory three-week break from classes at New Mexico public schools because of the coronavirus pandemic also means no games and no practice sessions until at least April 6.

Tucumcari High School athletic director and track coach Wayne Ferguson said the meets and games affected by the break won't be made up.

That trims at least seven games off the Rattlers' baseball schedule, including the previously scheduled home opener against Santa Rosa on March 24.

Tucumcari's boys and girls track teams will lose at least three meets off its schedule, including the previously scheduled Saturday home opener, the Rattler Relays, that included teams from Logan and San Jon. Also wiped from the schedule is the Logan Invitational on March 28.

The Lady Rattlers lost at least 10 varsity games from their schedule, though their home opener wasn't scheduled until April 7 against Pecos, after the mandatory break is slated to be over.

Athletic programs in Logan, House and Grady are affected in a similar fashion.

Ferguson didn't give his track teams any advice during the interim.

"They really don't want them to gather together," he said. "We haven't told them anything. They may be able to work out on their own, but we can't instruct them to do anything. We can't even open up our facilities to them."

"I can tell them to keep their arms loose and stuff like that," he said.

Dysart said he hoped the season would resume as usual after the break.

"I just hope it's a postponement and not a cancellation (of the season)," he said. "I've got a lot of seniors I'm counting on."

Lady Rattlers softball coach CJ Ogelsby said he gave his players some equipment before the break.

"I just told them to stay busy, stay focused," he said. "That's the main thing."

Ogelsby said his senior players are concerned the entire season might be canceled because of the pandemic.

"They are torn apart," he said. "They're worried."

At Mesalands Community College, its rodeo team saw two meets in Arizona canceled because of the outbreak. The Stampede was hoping another rodeo in early April would happen.