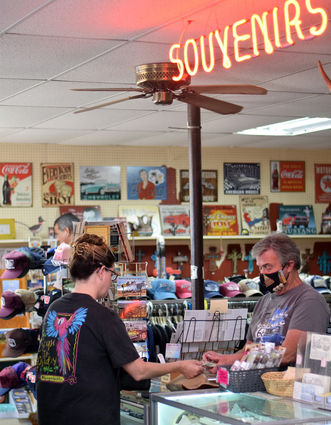 Amanda Jones of San Diego pays for a item Saturday to Tee Pee Curios co-owner Gar Engman the first day the store had reopened after being ordered closed 53 days because of the coronavirus pandemic. Jones said she and her fiancé were traveling to Iowa to surprise her mother.

One non-essential business owner in Tucumcari who'd been closed for weeks because of the coronavirus pandemic was elated to reopen Saturday. Two other businesses also cleared to reopen said they were prepared to file or join in a lawsuit against the state for the losses they incurred during their closures or restrictions.

Gov. Michelle Lujan Grisham announced Wednesday her amended public health order effective Saturday would allow all retailers except wholesalers and suppliers to reopen at 25% fire-code capacity with COVID-19 safeguards. Non-essential businesses had been closed since March to slow the virus' spread.

Gar Engman, co-owner of the historic Tee Pee Curios along Route 66 in Tucumcari, opened his door to customers for the first time in 53 days at 8 a.m. Saturday.

He cited a popular Pixar animated movie from 2006 that remains a touchstone for Route 66 fans.

"The first customers that came in today, I felt like the characters in the 'Cars' movie when they were jumping up and down: 'Customers! Customers!'" Engman said, laughing, referring to residents of the fictional and forlorn Route 66 town of Radiator Springs in the film.

Engman said he prepared his store, which dates to 1944, for reopening by placing X's on the floor to indicate spacing for social distancing, putting out a big bottle of self-serve hand sanitizer and giving the interior a thorough cleaning.

He'd received about a dozen customers by 11 a.m.

He said he tried to keep himself busy during the down time.

"We came down to check on the store every day, make sure everything was OK around here," he said. "We cleaned the house, walked our dogs every day."

He acknowledged it would be "an adjustment" to be back at the store regularly.

"I thought, 'I have to practice getting to work here by 8 o'clock,'" he said, laughing. "I'd forgotten a few switches I needed to turn on when I open."

Dale Harapat, owner of Mariposa Herbs and Gifts at 2101 S. First St., was awaiting one of his regular clients from Clovis when he reopened about 11 a.m. Saturday.

He also was thinking ahead about possible legal action against the state.

State police issued a cease-and-desist order against Harapat's shop in mid-April, citing it as a non-essential business that violated Gov. Michelle Lujan Grisham's public health order by being open. Mariposa eventually reopened as a curbside business, but it wasn't the same.

"This (shutdown) is going to affect me for a long time," he said. "I haven't had money to replenish stock, and I don't have money to pay bills. I was not eligible for unemployment or any loans. I was hoping some group would rescue us and take this governor on because I believe she's acting unconstitutionally and illegally."

Harapat said the Wisconsin Supreme Court's ruling last week that struck down that governor's stay-at-home order will create legal precedent for other challenges, including possibly by his lawyer, Travis Marston of Ruidoso.

"My attorney said it may have laid the groundwork for a successful lawsuit," Harapat said of the Wisconsin case. "These are regulatory orders from the health agencies that do not have the effect of law. These orders for me to close did not have the approval of the state legislature. We were waiting for business to open up, then we can determine our damages. We are looking for a large number of other attorneys who are representing people to possibly join in."

Harapat, who acknowledged his political conservatism is a rarity in the medical-herbs market, said he was dismayed there seemed to be little initial groundswell of opposition against Lujan Grisham.

"I'm a little disappointed, to be honest with you, with people of my generation allowing the government this kind of power over businesses, our lives," he said. "I'm almost 60 years old, I'm a veteran, and I just feel very saddened by what happened, that we have invested all our power in one governor."

Though the new health order prevents massage parlors from reopening, Harapat said he would continue to offer that service to customers.

"We're all mature adults, and we can take our own precautions and protect our own health," he added. "You can get an abortion, but you can't come in and buy a bag of peppermint herbs. It defies logic and common sense."

David White, operator of La Casa Verde Floral and Nursery at 724 E. Main St., said he didn't know late Saturday morning the governor's new order had allowed him to reopen at 25% capacity until a reporter told him.

La Casa Verde also had been issued a cease-and-desist order as non-essential, but White quickly converted his shop to a curbside business to keep sales going in addition to its usual floral deliveries.

White said "it's progress" his store was allowed to reopen to walk-in customers.

He also expressed interest in Harapat's possible lawsuit against the state.

"It's about time," he said. "We're in a rural community. This one-size-fits-all, blanket thing doesn't really work for us. I understand the principle behind it. I understand there's a pandemic going on, but this has gone on way crazy. It's gotten into our civil liberties and whole bunch of stuff. It ain't right."

White said he would be interested in joining the lawsuit once it's filed.

"I'm sure there are many (lawsuits) going on around the state," he said. "It's not just one business that's been impacted. But the state's lawyers are paid by our tax dollars. It may be an uphill battle. I don't have the bankroll to do it."