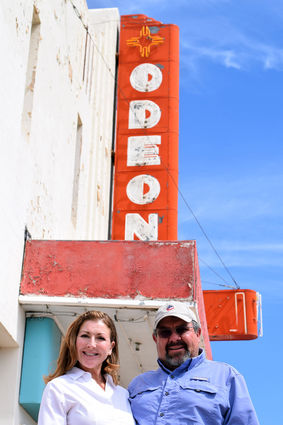 Odeon Theatre co-owners Christy Dominguez and Robert Lopez stand in front of the marquee in late May. They said they're eager to reopen the theater later this summer and eventually will sell concession items curbside in the interim.

Of the industry sectors impacted by the coronavirus pandemic, it's difficult to find one more affected than theaters.

In addition to states shutting down those venues because of the virus, studios stopped sending them new films in March.

Despite that, the husband-and-wife team that owns and operates the historic Odeon Theatre in Tucumcari, which remains Quay County's only operating movie venue, is optimistic they'll show films again in late July and will offer a quasi-preview by selling curbside concessions - including fresh-popped popcorn - during few to-be-determined days this month.

Robert Lopez and Christy Dominguez, who also is the theater's general manager, said during a recent phone interview they tentatively would reopen July 24 with Disney's "Mulan," a live-action remake of its 1998 animated film.

Dominguez noted some theaters across the country also have scheduled the Christopher Nolan thriller "Tenet" for July 17, but that is tentative - like virtually all plans amid the pandemic.

"The studios may push it back further if need be," she said. "They're not in any hurry. Disney is wanting to hold it back until they can fill the theaters.

Unlike many other businesses, the Odeon and other theaters hold few other options until public health officials and movie studios give the green light to reopen.

"We just have to take it on the chin until the studios are ready and we're ready."

"There's not much else you can do with a theater," Lopez added.

The state announced last week it would allow drive-in theaters to reopen under COVID-safe practices but not regular theaters.

The Odeon's last screening was "I Still Believe" on March 15. The theater, built in 1935, had the faith-based film only three days before the state's mandated shutdown of non-essential businesses. Many non-essential businesses reopened in late May, but "high-contact" places such as theaters, casinos, indoor malls and massage and tattoo parlors remain shuttered.

Since the closing, Lopez and Dominguez said they've done needed maintenance on the theater, including plumbing, projector upgrades and installing a new kettle on its antique popcorn machine.

Away from the Odeon, they said they're staying busy on their farm in rural Tucumcari.

"There's always things on the calendar to keep us busy," she said.

The Odeon Theatre landed a $500 grant from Tucumcari MainStreet and enrolled in the federal Payroll Protection Program as part of coronavirus relief.

The couple said they also have been uplifted by concern and support from residents.

"Everywhere we go, they're always asking, 'When's the next movie? When can we come back?'" Lopez said.