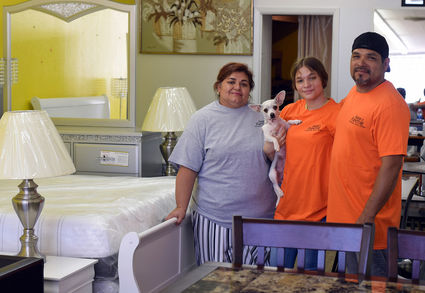 Luisa, Sarah and Rodolfo Vallejo, with their dog Paloma, pose Friday inside Sarah's Furniture at 113 S. Second St. in Tucumcari.

If you go to the newly opened Sarah's Furniture store in downtown Tucumcari, don't be surprised if you don't readily find Sarah herself.

That's because the store is named after the 14-year-old daughter of husband-and-wife co-owners Rodolfo and Luisa Vallejo of Tucumcari.

The store at 113 S. Second St. is a family business, and the Vallejos acknowledged their two children, including 24-year-old sheriff's deputy Rudy, would help occasionally with sales, setting up computers and other duties.

Rodolfo, who previously worked in Tucumcari in construction for nine years, said his family operated a furniture business where he once lived in Arizona.

"We wanted to open our own business," he said of Sarah's.

Rodolfo said he learned about the downtown storefront from his former boss, Al Patel, who owns the 66 Outlaw apparel shop next door and the Desert Inn motel.

Sarah's Furniture opened a few days before the long-awaited Second Street reconstruction project began June 16. Cars won't be able to park or drive on two blocks of that street for several months, but parking typically remains available on side streets.

Rodolfo indicated he was undeterred by the street work out front that is affecting his business.

"We just have to work around it," Rodolfo said, shrugging.

Rodolfo said Sarah's Furniture would deliver its furniture for free within a 25-mile radius of the store, which would include San Jon and Logan. Any furniture delivered outside of that radius would incur a small fee.