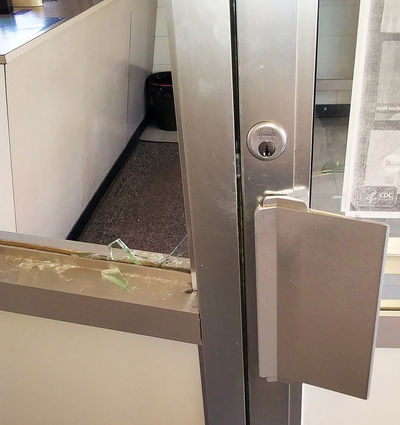 Broken glass is shown left of the interior door of the Nara Visa Post Office after a break-in that occurred late June 14 to early June 15. Burglaries also were reported at post offices in Amistad and Des Moines in Union County.

Federal authorities and two sheriff's departments are investigating break-ins at post offices at Nara Visa in Quay County and Amistad and Des Moines in Union County that occurred during the same time period.

According to an incident report from the Quay County Sheriff's Office, deputy Larry Cooksey was sent to the Nara Visa Post Office at 6:45 a.m. June 15 about a burglary there.

A window left of the post office's interior door had been broken. Postmaster Bucky Stone told the deputy it appeared a carrier and several packages were missing from the building.

A clerk at the post office later in the week said the facility closed that day but reopened the following day for usual business.

Ed Trejo, a postal inspector based in Albuquerque, confirmed in an email that burglaries also occurred at the Amistad and Des Moines post offices from late June 14 to early June 15, about the same time frame as the Nara Visa break-in.

Trejo said a reward would be offered for anyone who had information leading to the arrest of anyone involved with the burglaries.

Quay County Sheriff Russell Shafer said last week the break-ins at Nara Visa, Des Moines and Amistad were related, based on information from the preliminary investigation.

"Nara Visa either was the first one hit or the last one hit" in the spree, he said.

Karen Bell, one of the former school's caretakers, said the only damage was spray paint on a shed there.

Union County Sheriff James Lobb said in an email that investigative reports on the burglaries at the Des Moines and Amistad post offices weren't finished.