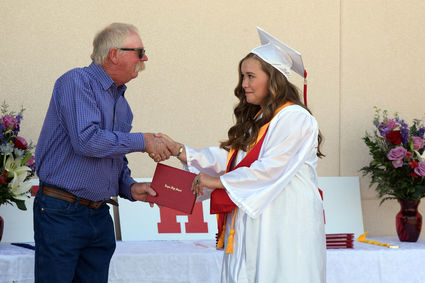 Logan High School valedictorian Amber Rivera receives her diploma and a handshake from school board president Scott Osborn during the graduation ceremony Saturday morning at the school's parking lot.

First, the school's superintendent said the state's Department of Health threatened to fine the district up to $1.75 million if it allowed the estimated 350 people to attend the ceremony at Logan's football field, violating the state's public health order.

Second, the superintendent said he was told a Texas county judge ordered the First Baptist Church in Dalhart, Texas, to not let Logan use the church as an alternate graduation site.

In the end, 19 of the school's 22 graduating seniors participated in the drive-up ceremony.

"I'm delighted to say we still honored our seniors here," Logan superintendent Dennis Roch said after the ceremony. "We got them their diplomas, and I think their families are happy. I was pleased we pulled this off today. I wish it had been more traditional. They deserved that. Our students had already lost so much this spring."

Vehicles containing the graduates and their families lined up on Third Street in alphabetical order Saturday morning as they individually were motioned into the parking lot for the ceremony.

They received flowers as their vehicles entered the lot. Each vehicle parked near the ceremony area, and each senior walked up to accept his or her diploma from Roch and two school board members.

Several people watching from nearby streets hollered, sounded air horns and car horns and rattled cowbells as each graduate officially completed his or her education at Logan.

The event was livestreamed over the internet, including a short video about the senior class before the ceremony began.

Afterward, valedictorian Amber Rivera and salutatorian Kesleah Shields gave their respective speeches in front of the livecam. The speeches contained themes of hope, resilience, patience, growth and bittersweet memories about spring activities canceled because of COVID-19.

Rivera said she appreciated the school district's efforts to organize a graduation and shrugged off the 11th-hour changes.

"With our class, something always seems to happen, so we were kind of prepared for it to happen," she said after her speech. "We just went with the strides. Everybody did good to show up at last minute's notice."

After the ceremony, people lined up along Logan's streets to salute the seniors during a parade.

The school board in meetings this spring had discussed booking an alternate location for graduation 70 miles northeast in Dalhart in anticipation the Lone Star State's COVID-19 regulations would be less restrictive than New Mexico's. It settled on First Baptist Church in Dalhart as the alternate site.

The district decided instead to use its football field as its graduation venue. Roch said it set up "pods" of five chairs 6 feet apart for the seniors to foster social distancing.

Senior sponsors surveyed seniors to see how many tickets for the ceremony would be requested to accommodate their families, Roch said. He estimated between 300 and 350 tickets were distributed for the event.

Roch and the board weeks ago had discussed ways to keep the total number of people below 100 for graduation. Gov. Michelle Lujan Grisham initially imposed a ban on mass gatherings of more than 100 people when her COVID-19 restrictions first took effect in mid-March.

Roch pointed out the mass-gatherings limit later was lowered to five people, though he acknowledged confusion over that number. Lujan Grisham's latest public health order, dated June 15, states a mass gathering "brings together five (5) or more individuals in a single room, confined outdoor space or an open outdoor space." The number does not count public officials or employees performing their duties.

"There are conflicting stories. I guess it depends if you're having a protest or having a ceremony," Roch said, referring in the former to the dozens of protests nationwide over police brutality.

Roch said the state's Public Education Department and Department of Health contacted him Thursday about the football-field ceremony. He said a DOH official threatened to fine the district $5,000 for each participant for violating the public health order. With 350 attending, that would have been a $1.75 million fine, he said.

"We were observing all the social distancing regulations, but the state saw otherwise," Roch said.

When told about the board's previous discussions about having a COVID-compliant ceremony, PED media relations coordinator Deborah Martinez wrote: "Our understanding is that they changed plans, and those plans fall well outside of the governor's public health order."

Logan Municipal Schools announced on social media Friday evening the graduation would be moved to First Baptist Church in Dalhart.

Roch said he received a call from the church's pastor, Michael Wilcox, at 11:30 p.m. Friday, telling him a Texas county judge informed the church that Logan could not hold its graduation there. He said Wilcox apologized. Roch said he had no information about the judge's order.

Hartley County Judge Ronnie Gordon said in a phone interview Monday no such order blocking the church from hosting the ceremony came from him or a judge in neighboring Dallam County. The church sits in Hartley County, near the Dallam County line.

"I don't know who made the call not to do it," he said of the court decision.

Rhonda Reyna, Dalhart's municipal judge, said Monday she also was unaware of any such court order.

Dana Abla, a secretary for the First Baptist Church in Dalhart, said Monday "there was no order" regarding the church hosting graduation but didn't elaborate. She said she would pass a phone message to Wilcox; the call was not returned before deadline.

Texas Gov. Greg Abbott also announced Friday the tightening of COVID-19 restrictions in the state because of a large surge of cases there. Dalhart straddles Dallam and Hartley counties, which total more than 100 cases since the pandemic began. Quay County totaled six cases through Sunday.

Logan Municipal Schools announced on social media and by text early Saturday the ceremony would be held drive-up style in the high school parking lot.

Roch said the district hoped to provide a traditional graduation ceremony "because they deserved it."

"That was our goal from the beginning," he said. "We had hoped by delaying our graduation by the end of June or possibly early July, the restrictions would ease up in the state of New Mexico to allow that."