Boat back before commission 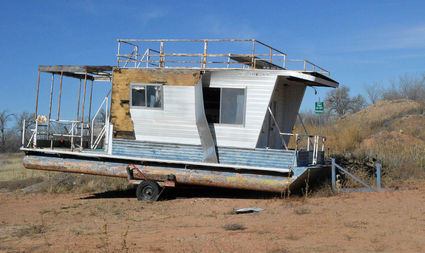 Miss Kristy, an abandoned boat that rested on a Tucumcari street for years, again was the subject of discussion at last week's city commission meeting.

The city of Tucumcari had a choice between principle and practicality in dealing with an abandoned pontoon boat that haunted a Tucumcari street for months before city officials hauled it to city lot, where it stands today.

Tucumcari Police Chief David Lathrom told a City Commission work session Thursday that when the boat first was brought to the attention of city officials, he presented then-city manager Britt Lusk with a choice: Tag it, tow it and dispose of it, or find owner James Napier of Albuquerque and make him responsible for disposing of the craft.

Lusk, he said, chose the latter.

That was two years ago, and the boat, named the "Miss Kristy," has been a headache ever since.

Randy Bates, superintendent of the Hyde Memorial Park near Santa Fe, told the commission tracking down Napier was made more difficult by the fact the boat's VIN number and identification information had been scratched off.

"You can't prove that the owner did it," he said of the scratched-off information.

Bates had been involved in the New Mexico Parks Department's search for the boat's owner, said he appeared at Thursday's work session "on my own."

Lathrom presented the commission with another choice: whether to pursue criminal charges or civil liability.

"If you go with the criminal charges," he said, "the owner will pay a $50 fine for violating an ordinance."

The criminal case, he said, required "proof beyond a reasonable doubt."

A civil case, which he recommended, could make the owner liable for storage and disposal costs, starting from the time the boat was abandoned on a Tucumcari street.

In addition, he said, a civil case requires only a "preponderance of evidence," in other words, 51% of the weight of evidence in the opinion of a judge or jury to establish liability, which he said could total "$5,000 to $6,000."

On the other hand, city manager Mark Martinez warned legal action could cost the city "thousands of dollars."

He agreed, however, a subpoena against Napier would be impractical "if we have to travel too far to deliver it."

The commission approved an Infrastructure Capital Improvement Plan for fiscal years 2022, which began July 1, to 2026. New Mexico legislation requires senior centers to submit such plans separate from the city's main infrastructure plan, which is filed annually.

The top priorities in the plan, which serves as a "wish list" for capital outlay funding in state legislative sessions, include:

n Replacement of exterior doors for the Tucumcari Senior Citizens Center, with a cost estimated at $10,000 to be allocated in the current fiscal year;

n Purchase of a new "hot shot" vehicle for delivery of hot meals to seniors who are homebound, with a cost of $60,000 to be allocated in fiscal year 2024;

n Kitchen equipment replacement, expected to cost $25,000 to be allocated in fiscal 2026;

Clara Rey, senior center director, said the new senior center was moved to the bottom of ICIP priorities this year because of its cost means it won't occur "for many years."

In his city manager's report, Martinez said he is working with Quay County government to increase the amount of federal Coronavirus Aid, Relief, and Economic Security Act funds available to small businesses in the city.

"The county got a much larger amount than we did," he said. CARES Act funds, administered through the New Mexico Department of Finance and Administration, is designed to reimburse small businesses for expenses incurred because of the COVID-19 pandemic.

Martinez said the process of determining how the money will be distributed is still in beginning stages.

Small businesses, he said, by the CARES Act definition, are those with fewer than 50 employees and less than $2 million in annual revenue.

Martinez also reported the city has completed repairs to the sprinkler system at North Side Park.

The city is also making progress on lighting for Dunn Park on the city's south side.

Moya asked Martinez whether the city would consider hiring another grant writer who would look for additional grant opportunities than the staff in the Community Development Department can because of time constraints.

In response to Moya's question about the status of the city's donation of baseball fields to Tucumcari Municipal Schools, Martinez said state officials are looking at details of the agreement, and when the state approves the arrangements, the land donation can be finalized.

Martinez said the city needs to ensure it will have access to adequate baseball and softball diamonds for city league play.

Moya also asked for progress on cleaning the rubble from a collapsed building at Second and Main streets. Martinez said he has contacted the building's owner who, he said, has plans to mitigate the damage "as soon as possible."

District 4 Commissioner Chris Arias said a joint powers agreement on rights to Ute Lake water has been submitted to the state Interstate Streams Commission for approval.

The city, he said, "will come out all right" in the agreement.

Litchfield said great progress is being made on establishing trails and signage at Five Mile Park, coordinated by the Greater Tucumcari Economic Development Corp.