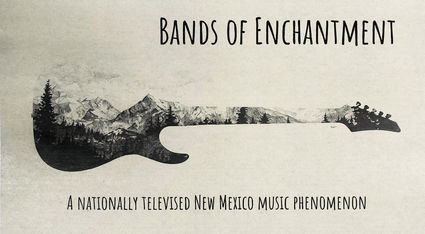 Though the production company involved in the upcoming "Bands of Enchantment" television show in Tucumcari has offices in Los Angeles, Chicago and Detroit, the main principals involved have deep roots in New Mexico.

Vincent Chavez of La Tewa Media, the show's director of marketing and client relations, is based in the northern New Mexico town of Sapello. He's not the show's only link to the state, however.

"This is a family affair," Peterson said during a phone interview Friday. "It's very exciting to come back home to bring a production to New Mexico and create jobs. We want to celebrate New Mexico."

"Bands of Enchantment" earlier this month received up to $60,000 in Tucumcari lodgers' tax funds for produce four of the eight episodes planned for the series. The show's production company will cover the rest of the cost through sponsorships.

Production is expected to begin in January, with an air time in the spring on New Mexico PBS stations, RFD-TV's Cowboy Channel and Amazon Prime, according to a news release Friday from the show.

The news release states the 30-minute episodes would feature music acts from different genres, "celebrating the rich cultural history of Americana music on the backdrop of beautiful New Mexico."

"Inspired by events such as 'Austin City Limits,' SXSW, 'MTV Unplugged' and 'American Bandstand,' 'Bands of Enchantment' will be an event not to miss!" the release stated.

Vincent Chavez said in a telephone interview Thursday the genesis of "Bands of Enchantment" sprung from a failed pitch in front of RFD-TV officials earlier this year.

"I approached RFD-TV on some scripted material. I heard they were wanting new programming," he recalled. "I ran some scripted ideas by them, and they said that wasn't what they were looking for.

"But then the conservation turned to a music show. They were receptive about that, and so we gave them some ideas about how the show would look. They kinda said, 'Yeah, we'll take the pilot. Let's go.'"

One of those ideas Chavez pitched was Peterson's proposal for a New Mexico-based music series.

"We've always had a passion for music," Peterson said. "I fell in love with it in New Mexico. I riffed on it and put it together after Vincent met with RFD-TV. I put together the look and the concept."

Shortly after that, Chavez said he pitched the show earlier this spring to chambers of commerce and tourism groups in New Mexico to find locations for the shooting.

He then received a fateful phone call from a person at the New Mexico Tourism Department whose name he doesn't recall.

"I received a call, saying, 'You may want to look at Tucumcari,'" he said. "They felt Tucumcari was under the radar, so to speak. They just kind of threw it out there, and I followed the lead."

"The most amazing thing about Tucumcari are the people," Chavez said of his impressions. "They want to do something. The energy's there. The city of Tucumcari sees the possibilities of getting a media platform that gives some exposure."

"They see the vision and the potential of what we could grow this into and kind of create an 'Austin City Limits'-style thing in Tucumcari," he said.

"As a boutique studio, Elkhorn develops, produces and distributes its own content," Vincent T. Chavez stated in the news release. "We hope this is the first of many projects made in New Mexico."

The COVID-19 pandemic put pre-production of "Bands of Enchantment" on hold during the summer. Vincent Chavez met with the Tucumcari Lodgers Tax Advisory Board twice this fall to discuss funding and found widespread support.

Peterson said his production company now is working on booking music acts for the show. Chavez said during one of the lodgers' tax board meetings that COVID-19 might actually help in that effort, as many music artists are unable to go on tour during the pandemic.

"We're really excited to get it going," Peterson said. "We're trying to line up the bands, the music and pull it all together - the fun stuff."

Peterson said his company is exploring the possible use of the state's film production tax credits for the "Bands of Enchantment" production.

A short sizzle-reel video of "Bands of Enchantment" may be seen at bandsofenchantment.com.

Peterson's resume includes 12 credits as an actor, five as a screenwriter and two as a producer.