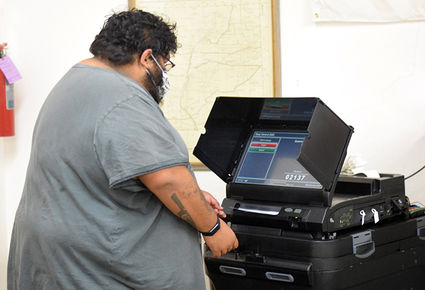 Estavan Villanueva of Tucumcari inserts his ballot into the vote-counting machine at the Quay County Clerk's Office. Villanueva was the last early voter during the general election, casting his ballot a few minutes before early voting closed at 6 p.m. Saturday.

Quay County's clerk said she wouldn't be surprised if crowds at polling places Tuesday for the general election were smaller than usual because so many residents had cast their ballots during early voting.

After the final early voter had submitte...