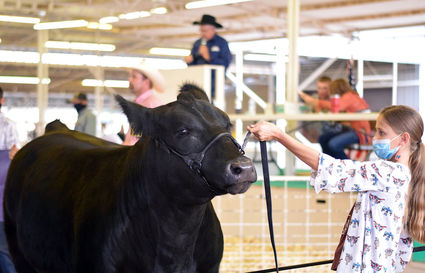 A masked Addie Lafferty shows her Quay County 4-H/FFA Expos grand champion steer during the Junior Livestock Auction at the Quay County Fairgrounds in August. The fair had been scaled down, then postponed, because of the pandemic.

Though state-mandated COVID-19 restrictions had affected all corners Quay County the first month of the year, the virus itself made a big impact in 2020's second half.

A total of 140 cases were reported in the county in November, with over 80 more in December. Two-thirds of Quay County's cases occurred in less than a two-month period, along with five deaths. Dozens of businesses and entities saw confirmed cases among employees.

Tucumcari experienced two significant outbreaks during the year, including in November and December when the state and nation saw the biggest upswing of the virus since the pandemic began.

A COVID-19 outbreak in Logan in August led to a two-week closing of Ute Lake State Park and a delay of the start of the academic year at Logan Municipal Schools.

The county fair also was delayed by an outbreak in his fair board.

All four of Quay County's public schools went to all-virtual instruction late in the year because of state mandates or outbreaks in their areas.

A ray of hope emerged just before Christmas when the Pfizer version of the COVID-19 vaccine arrived at Trigg Memorial Hospital in Tucumcari. The Moderna vaccine arrived shortly after that in a rollout for healthcare and frontline essential workers.

The top stories of the second half of 2020 are listed by the newspaper edition's date.

City to convert positions to part-time

The city of Tucumcari will not cut positions in fiscal year 2021 but will convert 10 positions to part-time and allow two employees to transfer into new positions in other departments. The city's finance director said cutbacks result more from state-mandated increases in the minimum wage than from reductions in revenue due to COVID-19.

It wasn't easy, but Logan High School held a graduation. The school district announced venue changes twice in barely 12 hours, settling on a drive-up ceremony at the high-school gym's parking lot. First, the state Department of Health threatened to fine the district up to $1.75 million if it allowed an estimated 350 people to attend the ceremony at Logan's football field. Second, the superintendent said he was told a Texas county judge ordered the First Baptist Church in Dalhart, Texas, to not let Logan use it as an alternate graduation site.

Graduation for San Jon High School's three seniors was moved outdoors as a drive-up ceremony due to coronavirus restrictions, but the immediate risk was sunstroke and heat exhaustion. The thermometer read 104 degrees less than a half-hour before the ceremony at the San Jon Community Center's parking lot.

The Quay County Fair in Tucumcari was canceled because of the pandemic and will be replaced with a stripped-down, livestock-only Quay County Expo for FFA and 4-H members in mid-August.

John Groesbeck, the former president of Mesalands Community College, filed a lawsuit against the college after his firing in April, alleging whistleblower violations and retaliation.

Craig Currell, a member of the Mesalands Community College board of trustees and a former operator of Currell Lumber Co. that constructed numerous buildings in Tucumcari, died after an extended illness. He was 76.

The governor announced the delay of in-person classes at public schools through Labor Day because of a sharp rise in coronavirus cases.

The San Jon school board voted during a special meeting to delay the first day of school to Sept. 8. San Jon's new school starting date is the same day a new order by Gov. Lujan Grisham that allows in-person teaching of elementary students goes into effect.

The Quay County 4-H/FFA Expo was postponed after a fair board member tested positive for COVID-19. About 15 members of the board were possibly exposed during a meeting at the Quay County Fairgrounds.

Tucumcari Public Schools posted its reopening plan for when the school year begins Aug. 17. Classes would begin remotely because of the state's coronavirus restrictions.

The New Mexico Supreme Court ruled the governor is authorized to impose stiff fines for violations of the state's public health order during the coronavirus pandemic.

The scheduled start of classes at Logan Municipal Schools was delayed after a staff member tested positive for COVID-19 and two other staff members showed symptoms.

The Knights of Columbus-St. Anne's Council 6937 in Tucumcari officially went inactive and its downtown hall sold partly because of financial difficulties caused by the COVID-19 pandemic. One of the council's officers and a district deputy expressed optimism the organization would resurface after a reorganization.

A Tucumcari man, presented with DNA evidence, confessed to setting a fire in 2012 that killed more than 70 animals at a local veterinarian clinic. The man was not charged because the statute of limitations expired on the case more than two years ago.

A fire with explosions that rocked an asphalt plant at Versatile Construction Co. on Tucumcari's north side caused alarm but no injuries. The fire billowed thick, black smoke high into the air that could be seen for miles.

Rancher tapped for MCC board

Tom Sidwell, co-owner of the JX Ranch south of Tucumcari, was tapped to serve on the Mesalands Community College board of directors. Sidwell takes over for Craig Currell, who died after an extended illness.

The New Mexico Supreme Court rejected a temporary restraining order from an Eddy County judge that sought to stop enforcement of the state's indoor-dining ban for restaurants during the COVID-19 pandemic. The court primarily ruled on similar grounds from another recent coronavirus-related case - that the New Mexico Legislature gave the Department of Health and other officials statutory authority to ban indoor dining at restaurants during public emergencies.

Save for exhibitors and volunteers wearing masks, the annual Junior Livestock Show at the Quay County Fairgrounds appeared normal compared to previous editions - much to the relief of organizers. The annual livestock shows at the fair were scaled down, then postponed, because COVID-19 affected a board member a day before the previously scheduled event.

Ute Lake State Park reopened on a limited basis for day-use recreation after being closed for two weeks when several employees showed signs of coronavirus and later tested positive for the disease.

Forty-five people visited the Mesalands Dinosaur Museum in Tucumcari - the first day tourists had been able to tour its exhibits in more than five months. All museums in the state had been closed because of the pandemic.

A Tucumcari man was charged with first-degree murder after being accused of fatally shooting another resident in the head. Dead was Bryan Youman, 19, of Tucumcari. Charged was Joshua Braziel, 30, of Tucumcari on counts of first-degree murder and possession of a controlled substance (methamphetamine). Braziel said the discharge of his gun was an accident, and he previously had pointed a firearm at the victim.

Quay County is receiving more than $520,000 and the city of Tucumcari more than $40,000 in federal coronavirus relief money "to cover the cost of necessary expenditures incurred due to the public health emergency."

The Tucumcari Lodgers Tax Advisory Board expressed enthusiasm to a marketing manager's formal proposal of music television series, "Bands of Enchantment," based primarily in Tucumcari that would be broadcast nationally.

After serving as Tucumcari's interim city manager twice in three years, Mark Martinez became city manager without the "interim." The Tucumcari City Commission voted to hire Martinez as the city manager and approved a two-year contract that includes an annual salary of $80,000.

The Quay County Commission approved a resolution that declared a state of emergency due to drought conditions and urged other counties, municipalities and state government to do the same.

The Logan Municipal Schools board voted during a special meeting to join as a plaintiff in a lawsuit against New Mexico Education Secretary Ryan Stewart and the state's Public Education Department. The superintendent and board members had chafed over what they perceived as onerous or arbitrary state regulations for districts regarding the pandemic.

Threatening to write a citation for "inciting an event" during the coronavirus pandemic, New Mexico State Police shut down the Tabletop Cooperative Harvest Fest at Tucumcari's Wailes Park.

Two proposals to promote Tucumcari via entertainment received funding authorization from the Tucumcari City Commission. "Bands of Enchantment," a music television series, received up to $60,000 in city lodgers' tax proceeds to produce four of eight episodes planned for the series. The commission also awarded $3,000 to Fast TV Network to defray the cost of its production of short videos that feature Tucumcari.

A Quay County sheriff's deputy helped a local woman give birth by the side of Highway 209 east of Ragland after she and her husband couldn't make it to a Clovis hospital on time.

The superintendent of Logan Municipal Schools said a substantial percentage of students during the pandemic are failing at least one class, illustrating the challenges of online learning.

Quay County set a record for early voting numbers. By the Friday before Election Day, the Quay County Clerk's Office had recorded 1,737 early votes, surpassing the previous record of 1,720 during the 2016 general election.

An unusually potent storm in late October, nearly two months before the official start of winter, dumped at least 10 inches of snow in Tucumcari and more in the region north of town.

Loretta's Burrito Hut will be closed indefinitely after the Tucumcari restaurant sustained major damage from an early morning fire. The owner vowed to rebuild.

Area voters retained 10th Judicial District Judge Albert Mitchell Jr. to his post, according to unofficial election results from Quay, De Baca and Harding counties. Results in conservative-leaning Quay County contrasted with the strong finish by Democrats in New Mexico overall, including the presidential race and a locally contested state senate seat. Quay County fell just short of a record with 64% turnout at the polls.

New Mexico was scheduled to begin a two-week "shelter in place" status and take a county-based approach for reopening against worsening COVID-19 infection rates.

Officials from New Mexico MainStreet and a graphic designer made a presentation of a late-stage prototype of the city's new tourism logo to the Tucumcari Lodgers Tax Board.

The New Mexico Department of Health reported the fifth death from COVID-19 in Quay County, along with a record-high 17 confirmed cases. It was the third death in the county in November.

The New Mexico Legislature easily approved a coronavirus relief bill during a special session, but two Republican lawmakers whose districts encompass all or most of Quay County were among those who voted against it.

Logan Municipal Schools became the fourth school district in Quay County to have in-person classes disrupted by the coronavirus pandemic. The district stated Logan schools will go entirely to online classes through Dec. 18 "due to a COVID case on campus."

The executive director for the Tucumcari/Quay County Chamber of Commerce is resigning her post in mid-January after a little less than three years there. Carmen Runyan said her last day would be Jan. 15.

The Tucumcari City commission approved an agreement with organizers of the proposed "Bands of Enchantment" television series through which the city will support production of the series' first four episodes in three payments totaling $60,000 in Lodgers Tax funds.

December's meeting of the Quay County Commission proved to be the finale for commissioners Sue Dowell and Mike Cherry, who had served in their posts since 2012 and were term-limited.

A Quay County government official launched her own "Make the Call" suicide-prevention campaign after learning of a spike of deaths by suicide in the area and recalling her own memories of contemplating suicide years ago.

A long-awaited COVID-19 vaccine arrived in Quay County when about two dozen health workers at Trigg Memorial Hospital in Tucumcari were injected with the Pfizer version of it.

Residents and travelers in Tucumcari were treated to a surprise sight - lights glowed brightly on on the big "T" of Tucumcari Mountain for the first time in many months.

The Family Dollar in Tucumcari will begin extensive renovations in mid-January that will close the store for two months but would add more than 2,500 square feet to its footprint.