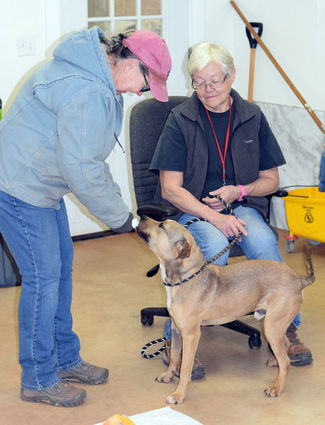 Paws and Claws Animal Rescue of Quay County President Kathi McClelland (left) greets Bones, a pitbull mix, as volunteer Tamy Willard holds the dog's leash Friday at the shelter. Bones made a remarkable recovery after being found in an emaciated and severely weakened state in a ditch near the shelter in early December.

Less than two months ago, Paws and Claws Animal Rescue of Quay County was directed to a stray dog just a few hundred feet from its rural Tucumcari facility. The emaciated dog was so weak, it could not stand. A local veterinarian treating him doubt...