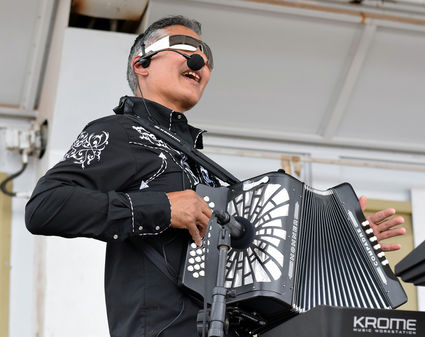 An accordionist with Jonathan Castillo y Profundo performs during the 2019 New Mexico Music Showcase. The COVID-19 pandemic prompted the cancellation of the June music festival for the second straight year.

Three Tucumcari festivals usually scheduled during the first half of the year have been canceled or at least delayed because of ongoing COVID-19 health restrictions.

The latest was the New Mexico Music Showcase, usually set in the first weekend in June. One of the organizers, Jerry Lopez, said the festival's committee decided Thursday night to cancel the event and concentrate its energies on the 2022 festival.

Lopez acknowledged earlier in the week he "not optimistic" about the prospects of holding the festival this year because of the pandemic.

He declined to comment about the cancellation of the 2021 event.

The official Facebook page for the Rockin' Route 66 festival, scheduled for late June, stated Wednesday the event was "on hold" because of the pandemic.

"We want to get back to living, and when we do we plan to rock Tucumcari, New Mexico. At our return, all of Route 66, will feel how we shake the route from Chicago to California!" the post stated. "Keep watching and never give up on that fact that we are ready to rock n' roll. Thank you for all the continued support and understanding. We want to be safe and we want to rock!"

Tucumcari Rawhide Days, usually scheduled in the first weekend in May, also has been canceled and instead will focus on the 2022 event, immediate past chairwoman TJ Riddle said last week.

The pandemic prompted the cancellation of those events in 2020, as well.

Officials with the Tucumcari Lodgers Tax Advisory Board asked City Manager Mark Martinez last month to call organizers of festivals scheduled during the first half of the year and advise them to refrain from spending promotional money on those events because of the increasing likelihood they would be canceled due to the pandemic.

Other events on Tucumcari's docket include Rattler Reunion, usually set for the first weekend in August, and Fired Up and Wheels on Fire 100, both set for Sept. 25.

Human Services Secretary David Scrase has expressed hope most New Mexico residents will have been vaccinated against COVID-19 by the fall.