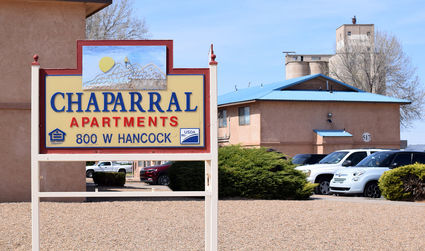 The Tucumcari City Commission voted during a special meeting last week to continue its contract with Monarch Properties of Albuquerque for the management of the west-side Chaparral Apartments for another three years.

The city of Tucumcari will continue its contract with Monarch Properties of Albuquerque for the management of the Chaparral Apartments for another three years, the city commission decided during a special meeting March 31.

Under the contract, the city pays Monarch $56 per unit per month, or $16,128 annually, to manage the 24-unit apartment complex at 800 W. Hancock Ave. as rent-subsidized housing. The city's share of management costs is subsidized as rent for the units by the U.S. Department of Agriculture's Rural Development organization.

The city also pays about $1,926.80 a month for the mortgage on the property on a 50-year schedule that the city pays 1% interest, again subsidized by Rural Development, according to Jerry Burkholder, Monarch's controller.

There was confusion among commissioners because of last year's takeover of the city's public housing by the Eastern New Mexico regional office of the U.S. Department of Housing and Urban Development.

The Chaparral Apartments, while considered part of Tucumcari's public housing, were not taken over by the regional HUD office in April 2020.

District 1 Commissioner Ralph Moya asked whether the same 98% occupancy standard, which the city's failure to fulfill in its public housing units resulting in the HUD takeover, would apply to Chaparral.

Burkholder assured the commissioners that standard does not apply.

Another Monarch representative said the apartments are 100% occupied all the time, anyway.

Burkholder also agreed to send monthly operating reports to City Manager Mark Martinez. The reports once went to go the Tucumcari Housing Authority, which was dissolved when the regional HUD office took over the public housing units.

After discussing the contract for about an hour, the commission on Wednesday voted unanimously to continue the contract with Monarch for another three years.