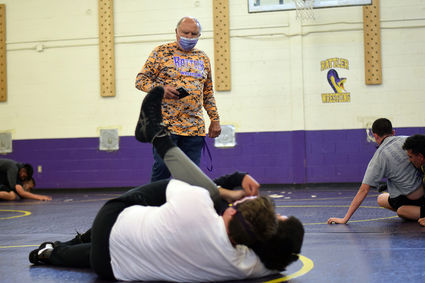 Tucumcari has another talented wrestling team getting ready to belatedly begin its season, but there will be a greater sense of urgency with each match this year.

That's because of the condensed schedule and a tougher qualification standards for the state tournament.

Tucumcari's Eddie Encinias, a Hall of Fame coach in his 20th year of leading the Rattlers, said the New Mexico Activities Association is considering as few as eight and maybe six wrestlers statewide per weight class qualifying for the Class 3A tournament.

Encinias said district champions would get an automatic bid. After that, winning percentages likely would be considered for wildcard berths.

"If you want in, you'd better win the district. You'd better go to win it," he said. "There are some kids who should be there (at the state tournament) who won't make it."

Even with a tough criteria, Encinias is confident two-thirds of his varsity wrestlers can qualify for state.

"I really think we can still qualify 10 of the 14 weight classes," he said. "And we've got some young bucks ... you never know, they might come through."

Among those Encinias holds high hopes are seniors Colt Garcia and Dyson Clark, who each won district titles last season. The other senior is Devin Apodaca.

Though Tucumcari's regular-season schedule was incomplete, Encinias said his team's only home match will be April 23, with Pecos as one of the foes.

"It'll be a three-way race - us, Robertson and St. Mike's," Encinias said. "And St. Mike's got a lot better; they were a young team last year. We beat them in the district duals last year, but it was close. And they return more skill people than we did. It'll be tough."

Encinias prides himself by putting his wrestlers through a lot of running and other cardio work before they get on the mats for practice.

"If the match is close in the third period, our guys are going to win it because of their conditioning," he said.

Encinias is hoping the district tournament will be moved from May 22 - mainly because Tucumcari High School's graduation is May 21.

"What's wrong is this year, we're going to wrestle after graduation," he said. "We're trying to push (the district meet) to May 15. That week (of graduation) is pretty distracting. It's a tough time to be in sports."

Another change Encinias noted is the Class 3A tournament at the Santa Ana Star Center in Rio Rancho will be just one day, though the slate for all enrollment classes is set for May 27-29.