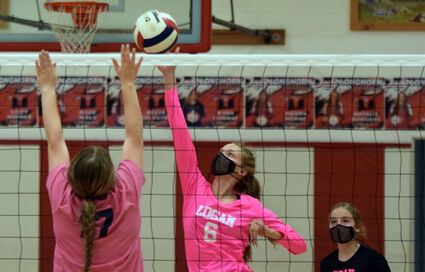 Logan's Natalie Bongers attempts a spike against Clovis Christian defender Emmy Maddy during a district volleyball match Saturday at Logan. Bongers had 10 kills during the match.

LOGAN - Despite the absence of one of the Lady Longhorns' top hitters, Logan easily defeated an overmatched Clovis Christian squad 25-10, 25-12, 25-14 during the opening of district play Saturday.

Logan improved to 10-3 overall, while Clovis Christian fell to 1-6.

The Lady Longhorns have been dealing with the absence of hitter Rilee Nials, who injured a groin muscle in practice about two weeks ago. Such injuries are notoriously slow to heal, and coach Robert Young anticipates she might not see action for two more weeks.

On Saturday, Natalie Bongers hit the ball with authority and tied with Reece Goldston for the team lead in kills with 10 during the match.

"She's been hitting the ball well for us," Young said of Bongers. "That's how she looks in practice, and she's starting to transfer that to her game. Normally, she's my middle hitter, but she does seem to hit better on the pins, and she jumps well. She's got some power."

The Eagles seldom led during the match. Logan's serving game kept Clovis Christian off-balance, leading to many passing errors. Logan ripped off scoring runs of 13-1, 9-1 and 12-1 in each set.

One of the Eagles' bright spots was Katie Garcia, who had five kills and two blocks.

Clovis Christian also is dealing with the absence of last season's top hitter, Sofia DeGroot, who moved to Texas during the offseason.

Young said he's been making some adjustments to his team's offense in recent weeks.

"We tried to work on our transition off the free balls and hopefully get out hitters back in the game a little faster than we have been," he explained. "We'd been a little slow and allowing other teams to set up two blockers against us. We're trying to get our offense a lot faster so we can face more single blocks than double blocks."

"The first set, we had no energy," Coyotes coach Jaree Elliott said. "We were playing careful not to lose instead of playing to win the point. Morale was down, and we were struggling to do the thins we normally do well."

"While they weren't all aces, they were tough serves and kept them out of the system," she said. "Karlee Elliott had some big kills in the third and fourth sets, also, that kept the momentum going our way in the third and got the momentum back in the fourth set when we dug ourselves a hole. Beating them was hard, and I was proud of my girls' mentality and fight to get it done."