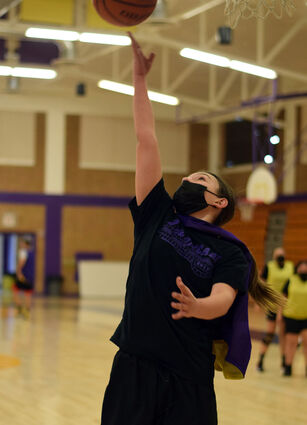 Junior point guard Alexus Lafferty drives to the hoop during shooting drills last week at the Snake Pit. The Lady Rattlers open their season Thursday against Mora at the Santa Rosa Invitational tournament.

The Tucumcari girls basketball team has virtually its entire varsity roster back, plus a few new additions who have experience with the program.

The one significant change is head coach. Gary Hittson stepped away from the program after 14 seasons to be assistant coach of the THS boys basketball squad.

Patrick Benavidez, who spent years as an assistant coach or coached middle-school girls, takes over leading the Lady Rattlers.

"I picked up a lot from Gary over the years," he said. "I hope to use that expertise in a lot of things."

The Lady Rattlers begin their season with a game Thursday against Mora (0-1) at the Santa Rosa Invitational tournament. Their first home game is Dec. 10 against defending Class 3A runner-up Robertson.

Benavidez said last year's team, which had no juniors or seniors, took its lumps during its COVID-compressed 1-10 campaign but gained a lot of experience.

The Lady Rattlers also are augmented by the return of seniors Elena Gutierrez, Izabela Reid and Illiana Reid, who add some much-needed size.

"I'm really excited to have some height this year because last year we didn't have any," he said. "We were having to pull shooting guards down low. Now, we have a more well-rounded team to put together."

Asked about his team's strengths, Benavidez said a key one is junior point guard Alexus Lafferty.

"With her and the seniors, they just work so well together," he said. "You saw it on the volleyball court; they just gel together. That's going to carry us a long ways.

Also among the returning players are sophomore Haisley Huffman and freshman Caylee Benavidez, who both were all-district.

"We just have a lot more flexibility from the roster," Benavidez said.

Asked what his team needs to work on, Benavidez said it is rebounding.

"We do have Izabela and Illiana back, but we still have to do better with our team rebounding," he said. "We've been working on that: Attacking the ball, boxing out ... the normal things."

Benavidez said his team will use an open-space offensive system that many of them used when he coached them in elementary and middle school.

"They know what I'm all about, and they're good athletes and have picked it up quickly," he said. "There's more spacing, and we just let the girls play. There's only a couple of girls who haven't run my offense, but it's pretty adaptable. I think we'll do pretty good with it."

Benavidez thinks his Lady Rattlers can contend in their district, which includes Dexter and New Mexico Military Institute. He said both those teams lost a number of seniors last season, and his team is basically intact and improving.