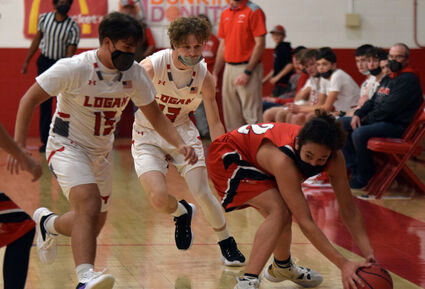 San Jon's Marvin Reese picks up a loose ball as Logan defenders Skyler DeLuca (left) and Christian Kotara rush in to trap him during a district game Jan. 24 at Logan.

LOGAN - The San Jon boys basketball team appeared to be OK early in their district clash against Logan, taking a 3-2 lead.

Then the roof caved in. The Longhorns scored 58 unanswered points over the next two quarters en route to a 90-10 victory on Jan. 24.

Logan coach Kyle Griffiths emptied his bench throughout the game and saw 12 of his 13 players score. Brock Burns led the Longhorns with 14 points, while Haden Judd and Diego Sanchez each added 12.

On paper, the Logan and San Jon squads didn't seem a lot different. Logan came into the game with four wins; San Jon had one victory.

But it became quickly apparent they were light-years apart in skill level and experience.

San Jon has no seniors, three juniors, one sophomore, one freshman and four eighth-graders on its varsity squad.

"It's frustrating," he said. "A lot of times you get a flash (of good play). We keep doing the same things, and you have to figure out it's not going to work.

"We've got to play. We have to hit the gym a lot more. The kids haven't played much. We've got to come back this summer and spend some time there."

Meanwhile, even a subpar Longhorns squad remains a potent force with their transition game. They forced a flurry of turnovers and scored many easy buckets on the fastbreak.

"It was nice to have the boys get out and get some confidence for the rest of district play," Griffiths said. "They hit some shots, played hard and looked like they were having fun. Those were some of the things we've been missing. We'd been up and down."

Logan probably would have tallied 100 points if the mercy clock hadn't started early in the third quarter. A continuous clock activates once the scoring gap hits 35 points.

Host Fort Sumner surged in the second half for a 68-53 district win Saturday over Logan.

"Once again, we played well in stretches," Griffiths said, noting his squad had closed the gap to three points in the third quarter. "Late in the game, we had some defensive lapses and couldn't recover."

Fort Sumner-House improved to 11-3, 4-1, and trails only Clovis Christian in the district standings.

Park Strong scored 22 points to lead the Longhorns to a 65-56 district win Thursday at Grady.

"We went through stretches were were looked really good," Griffiths said. "Kept getting big leads and then letting them come back into the game. Still need to work on keeping up our intensity for an entire game."

Host Grady stormed to an early lead and coasted during a 61-13 district victory Saturday over San Jon.

San Jon ended the week with a 1-11 record overall and 0-4 in the district.

Host San Jon proved to be no match to Fort Sumner-House during a district matchup on Jan. 25.