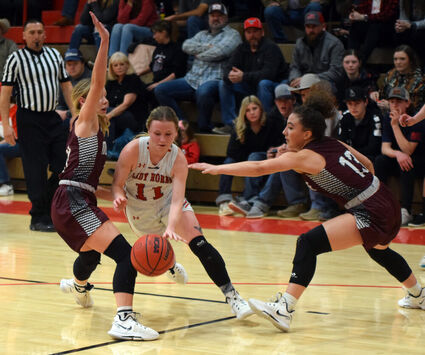 LOGAN - The Melrose girls basketball team continued its hot streak at the 3-point line, hitting seven shots behind the arc during a 48-46 victory Wednesday to oust the second-seeded Lady Longhorns from the district tournament.

Though Logan held a higher seed in the tournament over third-seeded Melrose, the Lady Longhorns suffered their second loss at home to the Lady Buffaloes in three weeks.

Melrose continued its run by edging top-seeded Fort Sumner-House 35-34 in the tournament final Friday and securing a playoff spot.

Logan, seeded third in the Class 1A tournament, will host Evangel/Oak Grove in the first round later this week.

Wednesday's game featured nine lead changes and four ties. Melrose made four straight free throws in the final 30 seconds. In contrast, Logan went 3-of-6 from the foul line in the final 1:28.

Logan's Reece Goldston made a 3-pointer at the buzzer, but Melrose had secured the win seconds before.

"Both teams made runs and did good things," Melrose coach Caleb King said. "We just happened to make the last run and get a little lead on them and held them off until the end there. It was one of those games where the clock ran out, and it was in our favor."

Isabelle Sena led the Lady Buffs with 19 points, including six in the fourth quarter, despite suffering from stomach flu.

"It was kind of like the Jordan game," King said, referring to Michael Jordan's heroic performance for the Chicago Bulls during a 1997 NBA Finals game despite food poisoning. "She played a heck of a game for us. She's a competitor. She's a Sena, just like Tristan Sena and the other ones. It was awesome."

"I wasn't happy with anything we did. We didn't do anything efficiently," she said.

Senior guard Kyra Conway scored 12 points to lead Logan, as did Goldston. Conway left the game briefly late in the fourth quarter after suffering a bruised elbow, then returned.

"She was doing just about everything she could," Strand said of Conway. "She just didn't have a whole lot of help."

Sena's two free throws with 29.5 seconds left gave Melrose a 46-42 lead. On Logan's subsequent possession, Conway clearly was looking for a play to develop with her teammates that didn't happen. Precious seconds ticked away, and by the time Goldston was fouled, just 16.1 seconds remained.

Goldston made one of two three throw to make it a 46-43 game. Melrose's Johanna Roybal was fouled with 10.5 seconds left, and she made both free throws for a 48-43 advantage.

San Jon's season ended with a 42-24 loss Feb. 22 to Melrose in the quarterfinals of the district tournament.

Melrose jumped to an 11-2 advantage after one quarter and led 33-6 by intermission.

"Not the way I wanted our season to end," San Jon coach Jaree Elliott said. "However, the hard-fought victory the night before left my girls without very much leg under them on Tuesday."

Elliott said her Lady Coyotes again were beset by foul trouble. She praised eighth-grader Alexa Becerra for showing confidence and scoring some "much needed" points.

San Jon, which went winless during the previous abbreviated season, was more competitive in district play. The Lady Coyotes, with no seniors on its varsity roster, will return its entire squad next season.

"All in all, our season showed much improvement and growth and a strong bond being built amongst my Mighty Eight," coach Elliott said. "The great thing about a team so young is we have a few years for them to all play together, and we don't just have a couple of older girls who are leaders; we have a team of growing girls who are leaders."

After going winless during its regular-season district schedule, San Jon unexpectedly notched a 61-54 win during the opening round of the district tournament over host Grady on Feb. 21.

San Jon outscored Grady 18-8 in the fourth quarter to seal the victory. Elliott scored 11 points during the period.

"It was the most well-rounded game we've played all season," coach Elliott said.

The coach said Archuleta started the game with a 3-pointer that "set the tempo" for the team's offense. She also praised Bailey McEwen and Dakota Fisher's defense on Grady's top scorers, Shayla White and Taylor Foote.

"Both still scored well, but we took a lot of scoring opportunities away with the defense," she said.

The Lady Broncos (9-14) beat San Jon by an average of 13 points in their previous two matchups.