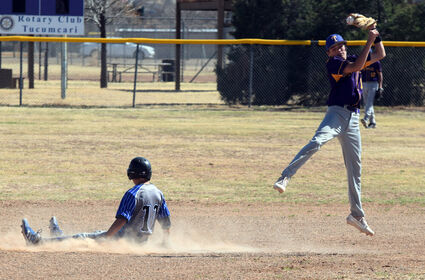 Tucumcari infielder Josh Griego jumps to catch a high throw as East Mountain's Sloan Manuel slides into second with a stolen base during the first game of a district doubleheader April 5 at Tucumcari.

The East Mountain baseball team showed last week why it is ranked fourth in Class 3A.

Tucumcari baseball showed it still has a lot of work to do.