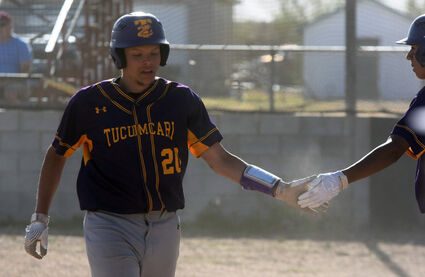 Tucumcari's Andrew Henderson-Clark is congratulated by a teammate after he scored during a double-steal in the fourth inning of the first game of a district doubleheader April 12 against Sandia Prep at Tucumcari.

Sandia Prep's baseball team rose to the No. 1 ranking in Class 3A a few days before its district matchup at Tucumcari, and it played like a top-ranked squad during a doubleheader sweep of the Rattlers on April 12.