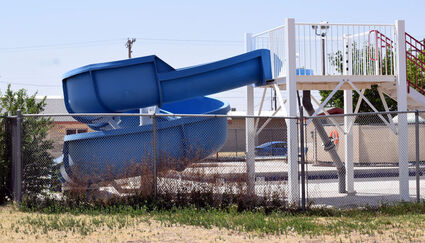 The Tucumcari City Pool has been idle since 2019 first because of the COVID-19 pandemic and more recently because of a costly leak under the facility.

A resident's complaint about the city's swimming pool remaining closed and a commissioner's response prompted the Tucumcari City Commission and its city manager to openly consider a bond issue to repair or replace the pool and possibly replace a leaky roof on the recreation center.

The proposal was sparked by Lisa Montoya during the public comment portion of Thursday's meeting. She said she was disappointed to learn the Tucumcari City Pool would not open for a third straight summer. Montoya said about 1,000 children attend Tucumcari Public Schools, and many use the pool. She asked the city commission to move up pool repairs on its list of priorities.

During his city manager's report later in the meeting, Mark Martinez said the city still owes about $60,000 on a state loan to repair the pool in 2006. That's not scheduled to be paid off until 2026.

About a year ago, Martinez said the parks and recreation chief investigated costs to repair a leak under the pool that causes the loss of "tens of thousands" of gallons of water. A Santa Fe pool contractor said it would cost $400,000 to repair the leak and install a new filtration system. The cost likely would be higher now due to inflation.

Martinez concluded it would be best to fill in the current pool and build a new one instead of repairing it. The city lacks available funds to do so.

Mayor Pro Tem Ralph Moya suggested a voter-approved bond issue to repair or replace the pool, retire the pool-repair debt from 2006 and repair a leaking roof at the Tucumcari Recreation Center.

"That's something we can look into," Martinez responded.

"I really like the idea," Commissioner Mike Cherry said.

Other commissioners seemed amenable to the idea; none voiced objection to it.

Commissioner Paul Villanueva during commissioner comments suggested an indoor pool be built at the recreation center not only for children but for elderly residents undergoing physical therapy.

After the meeting, Martinez said he would check whether such a bond-issue vote could happen during this year's general election on Nov. 8. If not, such a vote could be held during elections in 2023.

Martinez also said he would check the viability of building a splash pad instead of a pool. Such projects typically are less expensive and use less water. The commission's previous mayor pro tem, Todd Duplantis, suggested such a splash park in June 2021.

According to Quay County Sun archives, Tucumcari City Pool was built in 1976 at the corner of South Fifth Street and West Hines Avenue after the Metropolitan Park Bathhouse and Pool at Five Mile Park closed. The previous facility, once the largest in the Southwest, was built by the Civilian Conservation Corps in 1940.

• In a formality, the commission approved the March 23 resignation letter of Martinez, who exercised an option in his contract to return to his previous position as Tucumcari's assistant city manager. Commissioner Christopher Arias cast the only "no" vote.

Technically, Martinez's last day as city manager would be May 23, though he will continue to serve in the position until a replacement is hired.

During his city manager report, Martinez thanked the commission and residents for their support during his two years at the post, though he acknowledged the job sometimes was "stressful."

"It's solely my decision to do this," he said of his resignation. "This is where I want to continue to live and work. ... It's my time to step back and let someone else lead the city."

• Commissioners approved a revised advertisement for the city manager opening that would run through June and possibly July. During a work session, commissioners said expressed a change in the ad that a bachelor's degree was desired but not required. (Martinez said later in the meeting he was just short of earning a degree.) Moya suggested a candidate would need knowledge about budgets and writing grants. Commissioners suggested the base salary of $80,000 to $83,000 was too low but could be adjusted upward based on experience.

• Commissioners approved participation in the Eastern Plains Council of Government programs in the 2022-2023 fiscal year for $1,878. Mayor Ruth Ann Litchfield initially expressed reluctance, saying "they don't care as much for us" as EPCOG does with Clovis. Martinez recommended continuing the arrangement due to its aid with capital outlay requests and planning projects. He said the annual cost is "minimal" to the city's budget, and he would advocate the city avail itself more of EPCOG's services in the future. Litchfield, apparently satisfied with Martinez's support, voted in favor of the resolution.

• Commissioners approved a bid of $654,259.88 from DN Tanks to repair a concrete water tank off South 11th Street. It was the only bidder, and the Parkhill engineering firm urged its approval.

• Commissioners approved a $96,715.32 contract with the city and Youth Conservation Corps, with the city's share at $36,227.52. Martinez said the corps will help install a sprinkler system at Tucumcari Memorial Park cemetery, do beautification projects at parks and install a new roof on the Little League concessions stand. Job applications are available at City Hall, the community development office and the city's website.

• Commissioners approved a change order of $19,174.30 for additional repainting throughout the Tucumcari Convention Center. The facility recently underwent extensive floor and wall renovations.

• Commissioners approved a resolution to request $1 million in state Transportation Project Funds to improve streets and water systems in the Aber Addition, near the recreation center. It would require a $50,000 match from the city.

• Commissioners approved a resolution authorizing delivery of a Local Government Planning grant of nearly $5,000 to evaluate the city's drinking water system, according to city documents. They also approved a nearly $50,000 grant agreement with the state for the evaluation.

• Commissioners approved a clinical affiliation with Clovis Community College so its emergency medical technician students can ride along in city ambulances and get experience.

• Litchfield read a proclamation stating May 2-6 would be Teacher Appreciation Week in Tucumcari. Litchfield, a former teacher, said she appreciated educators' work "especially in the last two years" amid the COVID-19 pandemic. She also read a proclamation stating it was Rawhide Days in Tucumcari on April 29 to May 1, coinciding with the festival.

• The city approved a consent agenda that included a park-use permit at Damon Kvols Park requested by the Pure Elegance Car Club for its second annual Cruisin' 66 event on Aug. 6.

During a work session, commissioners heard complaints about the allegedly poor care of dogs in the city pound by animal control officer Santos Saenz.

Janet Garcia, a laboratory director at the city's wastewater plant near the pound, said she had documents and photographs of dogs not being given food or water for long periods. She said many of those dogs were confiscated from neglectful owners, and she didn't want them to be misused again. Garcia said she also found gates left open overnight, which would be a liability to the city.

Moya, who inspected the pound last week, said he found dog feces on the floor of the pound. He said the allegations are "definitely a concern" and "I'm upset we allow this to happen."

During public comments, Ryanne Lopez rebutted some of the accusations. She said Saenz works seven days a week and does code enforcement in addition to animal control duties. Lopez said he begins his day with five to 10 pending calls and feeds the dogs once a day.

"He does the best he can with no budget," she said.