Filmmaker may use Princess Theatre 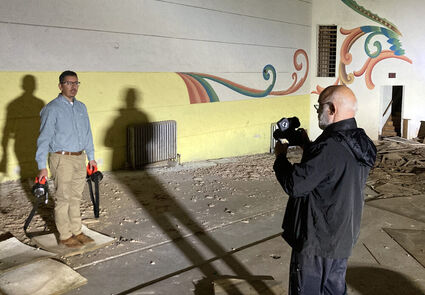 Scott Devitte films Tucumcari City Manager Mark Martinez as he explains the history of the Princess Theatre during a tour of its interior Thursday. Devitte said he's considering using it in a key scene in the "In the Year of Telecaster" movie he wants to make.

A filmmaker told the Tucumcari Lodgers Tax Advisory Board on Wednesday he is investigating the possibility of using the long-closed Princess Theatre in a movie that centers around the history of the Fender Telecaster electric guitar.