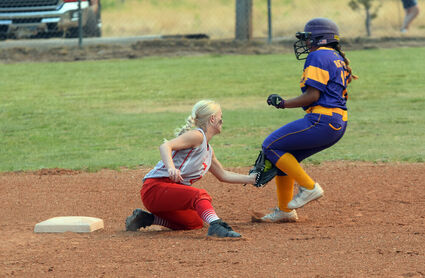 Logan infielder Camryn Cantrell tags out Tucumcari baserunner Alexis Ramirez after securing the throw from catcher Marilyn Cortez Moreno during the first game of a doubleheader on May 3 at Logan.

Tucumcari next will play in the Class 3A playoffs against Zuni on Wednesday at Cleveland High School in Albuquerque. (See other story in this edition.)

Tucumcari's Mireya Estrada pitched both games, going a total of seven innings. She allowed two hits and one walk while striking out nine.

"Our bats didn't show up today," Robertson said. "Our bats had been pretty decent in the last two weeks. Their pitcher is very good; she knows how to use her pitches, and she's around the (strike) zone."

In the opener, Tucumcari grabbed a 7-0 lead in the first inning on two hits, five walks and three Logan errors. The Lady Rattlers added nine runs in the third on five walks, one hit batter, four hits and one error.

"The girls that come off the bench work their butts off, and you can see that progression in their hitting and their confidence," he said. "It was good to see."

One bright spot for the Lady Longhorns was freshman catcher Marilyn Cortez Moreno, who threw out two Tucumcari runners attempting to steal and nearly nailed several others trying to advance on wild pitches. She also drove in Logan's only run of the day on a single with two runners aboard.

"She's a stud, and she wasn't even going to play softball when basketball was over," Robertson said. "I talked her into playing. You could see the girl had a great arm, even in basketball. Now she's having fun. And her bat's been great all year."

Though their 0-19 record after the doubleheader doesn't reflect it, Robertson said his team has improved its skills all season. Logan is rebuilding after a two-year hiatus during the COVID-19 pandemic.

"They've been getting better all year," he said. "They come to practice, having fun and ready to work. If they're having fun, it's easy to come out here and get better."

One day later, Logan earned its first victory of the season, during the finale against Clayton. (See other story in this edition.)