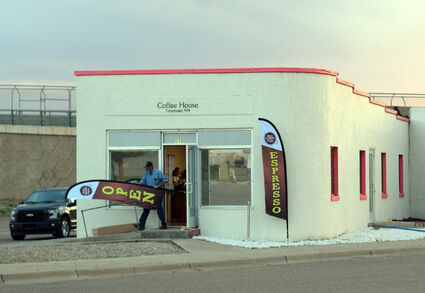 Co-owner Michael Carlson prepares to place an "open" banner in front of his Carlson Coffee Company that opened Saturday morning. The business is in the former Lena's Cafe building near the Tucumcari Historical Railroad Plaza.

To hear Michael Carlson tell it, it was the building itself that inspired him and his wife to open Carlson Coffee Company on Saturday near the historic Tucumcari railroad depot.

The nearly century-old structure at 115 E. Smith Ave., with its Strea...