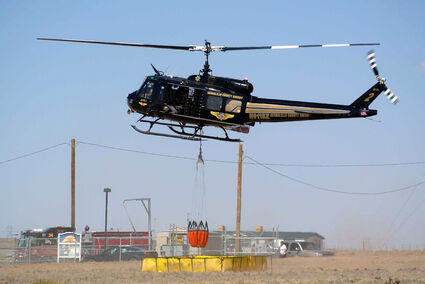 The helicopter was on its way back to Albuquerque after helping with a fire.

A high-ranking Bernalillo County Sheriff's Office official and three other first responders battling a small wildfire in northern New Mexico were all killed when the helicopter they were in crashed Saturday evening in a remote area south of Las Vegas.

A sheriff's office spokeswoman said the crew had been "providing bucket drops and other air logistics needs to fire crews on the ground" prior to the crash.

The cause of the crash is unknown, she said, adding an investigation is underway and the information provided "is still considered preliminary."

Koren was a pilot, although it's unclear whether he was piloting the helicopter at the time of the crash. Koren had been with the sheriff's office for more than 23 years, while Beers had been with BCSO for 12 years. Levison also was a member of the Air National Guard, and King was an accomplished paramedic of 17 years.

"Seldom do you lose one or two, much less undersheriffs and lieutenant officers as well as patrol deputies to a single event," said Dr. Drew Harrell, a University of New Mexico associate professor of Emergency Medicine who knew all four men and has worked on rescue missions with BCSO.

"It's a terrible hole and a sadness for the Bernalillo County Sheriff's Department that will certainly reverberate for quite some time."

He said he and others were preparing to respond to Saturday evening's crash before they were called off.

There were no survivors.

Police and firefighters from throughout New Mexico lined Interstate 25 on Sunday afternoon to pay tribute to the four first responders as their bodies were escorted to the Office of the Medical Investigator in Albuquerque.

Flags were raised along the route, and many saluted as the somber caravan of motorcycles, police vehicles and fire trucks brought the men back home.

Sheriff Manuel Gonzales and other members of the sheriff's office mourned behind closed doors Sunday as other public safety leaders talked about the men killed as heroes and relayed the massive void their deaths would leave.

"Our hearts are broken by the tragic and distressing news that we lost four of the state's finest public servants, killed in the line of duty," state Public Safety Cabinet Secretary Jason Bowie said in a statement. "It's a sacrifice no one should have to make."

Albuquerque Police Chief Harold Medina tweeted, "Prayers for our brothers and sisters in the county and all those effected by the loss suffered as a result of this tragic accident."

The crash happened near Chapelle - a small area about 25 miles south of Las Vegas.

BCSO said the crew had been helping to fight the East Mesa Fire, and the helicopter was heading back to Albuquerque.

Wendy Mason, a spokeswoman with the state Forestry Division, said the East Mesa fire is burning on private land south of La Liendre and is not threatening anything. She said the fire had grown to about 75 acres as of Sunday evening and was 65% contained. The fire started Thursday evening, and the cause is under investigation, she said.

New Mexico has seen a record-setting fire season this year, with the two largest wildfires in state history burning this summer. BCSO aircraft has been called on to help fight several fires in recent months.

New Mexico State Police announced the crash about 12:15 a.m. Sunday in a tweet.

"State Police is on scene of a helicopter crash with four fatalities in San Miguel county," the agency said.

"(The Federal Aviation Administration) and (National Transportation Safety Board) are responding to investigate. More information will be released when available."

BCSO announced minutes later its helicopter was the one that went down.

"There are no known survivors," Fuller said in her initial news release. "At this time the investigation into this incident is in its preliminary stages."

BCSO later tweeted, "We need all the prayers we can get right now" above a picture of a black band across a sheriff's office badge.

News of the deadly crash left New Mexicans - from the governor to parishioners at Sunday services - stunned.

Bernalillo County Commissioner Charlene Pyskoty took to social media to say she was "absolutely devastated," while Gov. Michelle Lujan Grisham said she was "heartbroken by the tragic loss of four New Mexicans while in the line of duty."

"These were four dedicated public servants who were doing what so many of our first responders do day in and day out: working tirelessly to serve and protect their fellow New Mexicans," Lujan Grisham said in a statement.

When Beers was promoted to lieutenant in 2020, Undersheriff Sid Convington talked about Beer's experience and the positions he held as a deputy.

Beers' wife, Anita, and son, Daniel, attended the ceremony. Daniel pinned the badge on his father.

"Everything is built from other people," Beers said. "From below us who have built it up, everyone else helped me to get to where I'm at."

In 2017, he organized a hike to the top of Mountain Wheeler, the highest point in New Mexico, as part of that effort, according to the Officer Down Memorial Page.

Matthew King had been a paramedic with the Bernalillo County Fire Department since 2005, when he graduated from the University of New Mexico EMS Academy Paramedic Program. He was a rescue specialist and helicopter hoist operator and was also a part-time faculty member at Central New Mexico Community College.

Levison, in addition to work for the sheriff's office, was a member of the New Mexico Air National Guard.

Koren was one of two BCSO undersheriffs. He had been with the sheriff's office for more than 23 years. Prior to his career in law enforcement, he was an aircraft mechanic and pilot.

He told the Albuquerque Journal earlier this year when BCSO bought a repurposed military helicopter for $1 in the early 2000s, he overhauled and rebuilt it.

"It was all in addition to my duties as a field deputy out on patrol on a graveyard shift," Koren said. "I would come in and work extra, and volunteer a lot of hours and blood, sweat and tears into those programs."

During his recent unsuccessful run for sheriff, Koren said despite the so-called "defund the police" movement, he hadn't given up on Albuquerque and wanted to continue to work in law enforcement.

"Have I given up and has the community given up," Koren said during his campaign. "I haven't. I'm still in the fight right now - fighting crime and protecting others."

Harrell, the UNM associate professor of emergency professor, said he was a physician on many rescue missions piloted by Koren.

"We're not sure the man ever slept; he was the consummate professional," he said. "If you needed to talk to him, he picked up the phone."

He described Beers as a thoughtful, pragmatic deputy.

Koren piloted the New Year's Day rescue of 19 TEN 3 employees and a tram operator who got stuck while descending in the Sandia Peak Aerial Tramway on New Year's Eve. Beers also helped in the rescue.

"Over the last 24 hours we've had a lot of time for introspection and retrospection, and I cannot recall a time that I ever remember Undersheriff Koren or Lt. Beers being anything other than two of the calmest individuals working through a problem," Harrell said.

"I never worried with Larry at the controls about how we were going to handle the rescue."

He described the crew's ill-fated Saturday mission as routine.

"It takes a huge team to make these operations work. And we've lost a huge part of that team," Harrell said. "And it's going to take a long time for everyone to come to grips with that. We've lost four outstanding individuals who dedicated their lives to making sure that the people that live in Bernalillo County and Albuquerque in the greater metropolitan area and the state of New Mexico are safe."