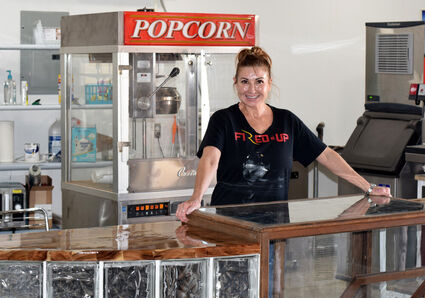 Odeon Theatre co-owner Christy Dominguez stands behind the rebuilt concession stand. The Odeon will reopen as a movie house on Thursday night with a screening of the 2016 film, "Hell or High Water," that was shot in Tucumcari.

The co-owners of the Odeon Theatre in downtown Tucumcari were determined to reopen by Sept. 1, hell or high water.

So it seems appropriate it will screen a film of the same name.

The Odeon will reopen as a movie venue Thursday for the first time in nearly 2 1/2 years with a 7 p.m. screening of the 2016 Oscar-nominated film, "Hell or High Water," that was shot in Tucumcari and other parts of eastern New Mexico.

Half-priced popcorn and sodas will be offered as part of the celebration, and admission will be free that night and 7 p.m. Saturday. After that, the theater will be closed and will resume its screening of more recent movies by Friday, Sept. 9.

Showing that film this week wasn't an accident, said general manager Christy Dominguez, who co-owns the 1936 theater with her husband, Robert Lopez.

"It was all on purpose. Come hell or high water, I'm going to be done," she said last Thursday.

Movie-goers will be greeted by an entirely renovated lobby and concession stand after termites wrecked the previous stand. The stand was rebuilt with polished wood and retro-style glass blocks, along with a new popcorn machine to replace its 1954 Manley model and its deteriorated kettle.

Dominguez said one display window in the lobby eventually will contain the old popcorn machine, plus old photos of the theater and several pieces of Odeon merchandise.

The Odeon is on the National Register of Historic Places and remains Quay County's only operating movie house.

After "Hell or High Water," Dominguez said she plans to book a more recent movie for the following weekend, though she wasn't sure which one. She said the Odeon eventually will screen films five to six nights a week.

She also plans to expand the concession stand's offerings in the next two weeks or so. That would include paninis, sandwiches, sausages, hot dogs and chili.

But that's not happening right away.

"I was petrified at first because of all the food things I wanted to bring in, but I settled myself," she said. "I calmed my little nerves and decided to bring it in slowly. Let's get the remodel done, get the kitchen functioning, get the popcorn out, get the Cokes out, get the ice machine working ... let's get the normal things going again."

Dominguez said she eventually wants the Odeon to be a daytime destination, too.

"I want to be open at 11 o'clock, I want to sell food, and I want to show a movie during the day for free so the public can come in and we can serve them some lunch or have some snacks," she said.

"That's the ultimate goal, the big picture. I want to eventually have a bistro here. That's the only way we make money is with concessions. So I need to open that up and bring more out of it."

The Odeon had been shut down since March 15, 2020, after its abbreviated run of the faith-based film "I Still Believe" because of the onset of the COVID-19 pandemic.

Dominguez stocked up on food before "I Still Believe." The shutdown was so long, she threw out all that food because it went past its shelf life.

After that, the theater underwent extensive repairs or remodeling, including new air conditioning units in the lobby and projection booth and an expensive repairs to the digital projector.

Dominguez said a federal shuttered venue operators grant covered part of the renovations, but not all. On the radar is a makeover of the Odeon's exterior.

"Hell or High Water," starring Jeff Bridges and Chris Pine, is the story of two brothers who rob banks while being pursued by Texas rangers. Several scenes were shot in Tucumcari, including right in front of the Odeon. The film was nominated for four Academy Awards: Best Picture, Best Original Screenplay, Best Editing and Best Supporting Actor (for Bridges).