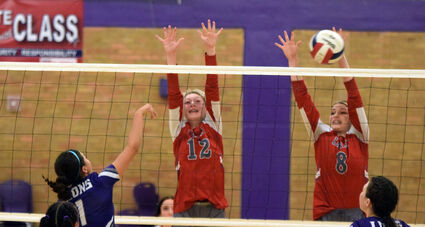 Logan's Haylie Bidegain (12) and Kaylee Williams (8) combine for a block against a Santa Rosa attacker during the championship match Saturday of the Tucumcari Invitational.

Logan won the hard-fought battle against Tucumcari but lost the war Saturday night during the Tucumcari Invitational volleyball tournament.

A few hours after a two-hour, five-set semifinal victory over the host team, an apparently less-sharp Lady...