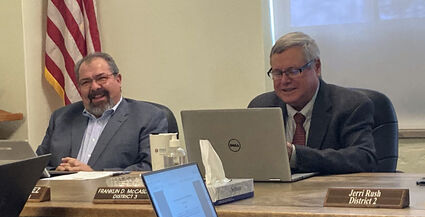 Quay County Commission Chairman Franklin McCasland, right, shares a laugh with fellow commissioner Robert Lopez during Monday's meeting. It was McCasland's final meeting after a total of 16 years with the commission.

Quay County Commission Chairman Franklin McCasland heard a steady stream of praise from fellow commissioners and other officials during his last meeting Monday morning after a total of 16 years on the board.

Near the end of the meeting, county manager Daniel Zamora thanked McCasland for his service.

"I hope you'll still answer the phone if I have a question," Zamora said.

McCasland responded he still held "a passion" to Quay County and pledged to help the community if needed.

That prompted a round of applause from those seated in the gallery.

"We don't know how lucky we've been to have Franklin on the commission all these years," Frost said, adding McCasland remained "nonpartisan" and "he wants to do the right thing."

Frost concluded his remarks by saying McCasland deserved another round of applause, which he received.

Fellow commissioner Robert Lopez said it was a privilege to serve with McCasland. The other commissioner, Jerri Rush, said she was "grateful" for his guidance during her first two years in office.

"It's been an honor and privilege to serve the citizens," McCasland said.

McCasland began his first eight-year tenure in the county commission in 2003, then took four years off when he was term-limited. He served on the commission again for another eight years and became term-limited again.

After Monday's meeting adjourned, McCasland dismissed the notion he might yet run again in four years.

"I'll help from the sideline," he said.

Replacing McCasland in January will be retired schoolteacher, broadcaster and rancher Brian Fortner, who won the GOP primary this summer and breezed to victory in the November general election. Fortner has attended each county commission meeting since announcing his candidacy early this year.

In other business Monday:

- During public comments, Kathy Elliott, a partner with the Clinton Harden & Associates lobbying firm in Clovis, said it is working with Zamora on the county's capital outlay list but instead would recommend funding for a new Tucumcari hospital be in the state government's appropriations bill in next month's legislative session.

Elliott said though lawmakers are dealing with record revenue, they likely would impose a cap on capital outlay allocations. She said the appropriations bill would provide "more opportunity" for the hospital to be funded.

Dr. Dan C. Trigg Memorial Hospital, built in 1964, is reaching near the end of its useful life. Zamora said after the meeting that Stantec, which received a nearly $1 million design contract for a new hospital, will make its final presentation at the commission's next meeting on Jan. 9.

A Stantec official said at a previous commission meeting he estimated a new hospital would cost more than $20 million. Zamora repeatedly has said he wants state and federal funding to cover the construction. No local tax increases would fund the new hospital, as the county lacks bonding capacity. The hospital would be built on donated land directly south of the current facility.

Zamora said members of the Quay County Health Council are writing letters to lawmakers, urging them to fund a new hospital. He urged residents do the same.

- In a routine matter, commissioners approved a $250,000 mill levy and gross receipts tax payment to the hospital for its fourth quarter.

Lopez commented on the "huge number" of patient numbers at the hospital.

Gutierrez agreed, saying: "It's a lot more than you think when you total it up."

Gutierrez said the hospital administered more than 400 flu shots at clinics in Tucumcari, Logan and Mosquero. She also said Trigg Memorial Hospital is partnering with Mesalands Community College as a clinical site for phlebotomy, certified nursing assistants and the future nursing program.

- Connie Loveland, director of Tucumcari MainStreet, gave an update on the organization's activities. She said the TucumScary event during the Halloween season drew more vendors than the Fired Up festival and more than 1,500 people. She said Tucumcari MainStreet is considering requests to expand TucumScary in 2023 and close Main Street for safety reasons during that time.

Lopez, a co-owner of the Odeon Theatre, praised Loveland's activities in downtown.

- Patrick Vanderpool, director for the Greater Tucumcari Economic Development Corporation, said many companies are reviewing their strategic plans after the COVID-19 pandemic. He said Tucumcari remains at a disadvantage because of a lack of suitable buildings for companies. He said the EDC is looking at opportunities from an enterprise fund to finance such buildings or build-to-suit proposals.

Vanderpool also noted Quay County has a higher percentage of people eligible for the workforce who are not seeking jobs. He also noted almost half of the county's grocery purchases occurred outside of the region.

- Commissioners approved a resolution of an American Rescue Plan Act budget increase of almost $55,000 for employee incentive pay. The pay is designed to help counteract inflation.

Lopez noted in earlier budget discussions, commissioners talked about allocating a lower amount of money to managers. McCasland admitted he'd forgotten about those discussions until recently. Lopez moved to approve the resolution with the hope commissioners be "more intentional" during future budget talks about the issue.

Rush, noting holidays sometimes reduce the county's workweek to three days, said she received "some pushback" on the county reducing its workweek from five to four days early this year.

County Clerk Ellen White said the four-day week was working well. McCasland and Lopez each said they heard no complaints about the shorter workweek.

- Commissioners approved the donation of a 1996 International firetruck from Porter to the City of Santa Rosa. Fire marshal Lucas Bugg said no local fire district wanted the vehicle, and Santa Rosa desired it because of "several failures" with its trucks.