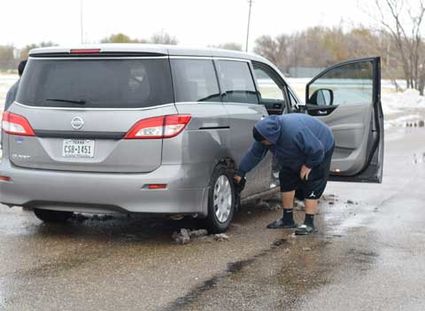 Michael Rubalcava knocks the ice out from the wheel well of the mini-van he and his family are traveling in to Clayton.

link Michael Rubalcava knocks the ice out from the wheel well of the mini-van he and his family are traveling in to Clayton.

The system that moved into Quay County on Thanksgiving came from a strong cold front that combined with moisture from the Gulf of Mexico, said Clay Anderson, meteorologist with the National Weather Service in Albuquerque.

Anderson said the moisture from the Gulf created the wet conditions in the prolonged front that dropped as much as 1 inch of rain/ice across the region resulting in ice formations from a tenth of an inch to a quarter-inch thick on roadways.

“There was only one time that a road had to be shut down due to the weather, but that request came from Texas as they worked to clear its roads, said Yvonne Aragon,” New Mexico Department of Transportation spokesperson.

Aragon said in Quay County 16 plows were in continuous operation by NMDOT trying to keep the roads passable and safe for travelers. She said NMDOT staffers in Tucumcari, San Jon, Nara Visa and Ragland rotated 12-hour shifts from Thursday to Sunday to help keep travelers safe.

Aragon said road conditions varied on all the roads and highways in Quay County. She said the worst conditions were near Nara Visa, where black ice formed on U.S. Highway 54, creating added hazard to motorists.

“The crews did an outstanding job during this storm,” Aragon said.

Despite the icy conditions, only six accidents on I-40 and U.S. 54 were reported during the storm, said Tucumcari Deputy Police Chief Pete Rivera.

Rivera said four accidents were reported within the city, but added that three of them occurred in parking lots. None of the accidents involved alcohol, Rivera added.

“Fortunately it did not get too bad, despite the road conditions,” Rivera said.

“There was an overwhelming number of calls for service ranging from accidents to stranded motorists,” said Linda Unruh, owner of All-Rite towing.

Unruh said that during the storm, her company deployed as many as 20 trucks to respond to calls for help; she explained that many of the calls involved motorists who were stuck in medians. Unruh said her company drivers often take the motorist to a motel before retrieving the vehicle. Trucks even helped tractor-trailers that were stuck at local fuel stations free of charge, Unruh said.

Unruh said no storm is ever the same. They produce varying numbers of calls for service, Unruh said.

No accident statistics were available at press time from the New Mexico State Police district that includes Tucumcari, Clovis and Santa Rosa.

Despite snowfall, icy road conditions and a high of 28 on Friday, the inclement weather did not sway motorists from traveling or local residents from pursuing Black Friday deals.

“It was bad all the way from Santa Rosa to Tucumcari,” said Michael Rubalcava, of El Paso.

Rubalcava said he and his family are traveling from El Paso to Clayton for the holidays. He said the road conditions on U.S. 54 from Las Cruces were OK -- until they got near Santa Rosa.

Rubalcava and his family stopped at the Kmart in Tucumcari to knock ice deposits from the wheel hubs before continuing to Clayton.

The Kmart parking lot was filled with vehicles of shoppers who braved the weather to take advantage of the Black Friday deals.

The sales have been going on since 6 a.m. Thursday, said Mary Purser, the Kmart manager.

Purser said there had been a lull in customer traffic during the height of the storm in Tucumcari – from around 2 a.m. until 5 p.m. Friday. She said business picked up once again around 5:30 p.m., and at one point the store had to have all five registers opened; the lines remained long.

Purser said extended Black Friday deals and the return of the “Blue Light” specials are just two of the ways Kmart is working to bring local shoppers back to the store.

Sales were also up at area hardware stores before and during the storm system.

There was a combination of needs and purchases by customers before, during and after the storm hit, Windsor “Win” Wright, manager ACE Hardware in Tucumcari.

Wright said before the storm there were increased sales of snow shovels and wood pellets (fuel for wood pellet stove). He said they sold 3/4 a pallet of ice melt that is 120 sacks per pallet. Several customers bought space heaters as well, Wright added.

Wright said the storm produced an increase in sales of plumbing supplies to repair frozen pipes.