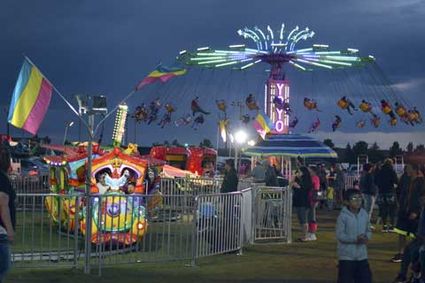 The Quay County Fair has come and gone for another year with this year’s attendance being estimated as greater than last year’s, according to Jason Lamm, county agriculture agent.

Lamm said the fair produced a lot of increased numbers, including an increase in the number of entrants for the junior livestock division, which he said saw an increase of 10 percent in participation.

Lamm said this includes an increase in the entries for the rabbit, poultry, goat, and pigs showcases from local 4-H members. He said there was even an increase of 15 to 20 entries from the public.

“This was a pretty good turnout for our fair across the board,” Lamm said.

The fair was so successful and the response from the community was so kind it has convinced first-time vendors Jeff and Kathy Kenney to return next year.

“The people of Tucumcari have been absolutely amazing,” said Kathy Kenny.

Jeff said the pair hails from Oklahoma City, Oklahoma, and travel across the country to different events to sell their items. He said he has been in the food vending business for 10 years and was joined by Kathy three years ago.

“The Junebug drink recipe is a secret, even from Jeff,” Kathy said jokingly. “It gives me a bit of job security”.

Kathy said the pair had just come in from the fair in Santa Rosa and had Tucumcari marked on their calendar. She said they wanted to see what kind of business they did at the fair and determine if it was going to become one of the yearly regular stops.

“We both love the New Mexico countryside, weather and people,” Kathy said.

Kathy Kenny said not only was the response of the people who visited their trailer positive, the entire community had a positive response during their visit. She said every one was so kind and hospitable.

“There is also no shortage of great places to eat in Tucumcari,” Kathy said.

Although the Kenneys did give residents some eating experiences of their own.

“It is heavenly, so rich but heavenly,” said Angelica Gonzales as she tried a fried peanut butter and jelly sandwich from Junebugs.

Kathy said there are a variety of unique items on the menu, all of which cost $5. She said the menu is developed from a trial-and-error method. “Different items are added and the ones the public like are the ones we keep,” Kathy said.

Kathy Kenny said they did not expect such a popular response to their fried macaroni and cheese. “People enjoyed our food as much as we enjoyed their company,” Kathy said.