By Staff of Quay County Sun 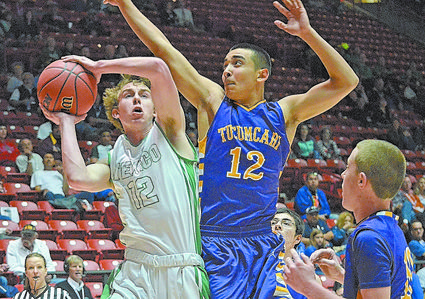 Texico senior Brannon Karger draws contact from Tucumcari defender Jose Flores-Duran in the second quarter of a Class 3A state championship on March 15 at The Pit in Albuquerque. Karger had 24 points in Texico's 77-52 win.

Editor's note: This is one in a series of stories recapping news events in 2016.

The third time was the charm for San Jon/Grady, as 2016 was the year it hoisted a state football blue trophy.

This was San Jon/Grady's third time in a state-championship game, losing the previous two. It is the first title in the program's history, which began in 2005.

A failed fourth-down conversion attempt by the Panthers (6-5) late in the game turned the ball over on downs to the Coyotes. San Jon, 9-0, then just had to run out the clock for the victory.

In other sports news:

• The Tucumcari Rattlers wrestling team ended its season with four of 11 state competitors placing fifth at the 3-4A state wrestling tournament on Feb. 20 and Feb. 21 at Rio Rancho.

• The Tucumcari Rattlers (21-6) lost in the championship of the 3A state basketball tournament 77-52 on March 12 to the Texico Wolverines (22-5). The Rattlers, who ousted top-seeded Lordsburg 79-66 behind 34 from John Paul Garcia, were the District 5 3A champions.

• The Tucumcari Lady Rattlers (18-8) lost in the quarterfinals of the 3A state basketball tournament 70-38 on March 8 to the Texico Lady Wolverines (24-4). The Lady Rattlers were the District 5 3A champions.

The Logan Lady Longhorns (23-8) lost in the championship of the 2A state basketball tournament on March 11 to the Melrose Lady Buffaloes (21-9). The Lady Longhorns were the District 6 2A champions.

• Coaches, players and managers of Quay County high school basketball teams competing in the 1A, 2A and 3A state tournaments received honors on April 28 at the Tucumcari Elks Club.

Kyle Jurney of Eunice competed at the CNFR with Bobby Flores (heeler) from Cochise on June 12-18 at the Casper Event Center.

Jurney and Flores had never competed together prior to the college finals, said Mesalands rodeo coach Tim Abbott.

Abbott said their situation was unique, and they made the best of it. The team ropers were sitting in sixth place halfway through the competition. After that, they had a little trouble in the event, which brought them to 14th in the nation in the team roping.

• The Tucumcari Lady Rattlers Cross Country Team placed third on Oct. 15 at the district competition at Laguna Aroma. The Lady Rattlers' third-place finish qualified them as a team to compete at the 3A state championship on Nov. 15 at Rio Rancho.

• Three former Quay County residents were among those nominated for the New Mexico Sports Hall of Fame in September.

Campbell, Stephens and Villanueva were among 70 nominees.

The new members were announced in December with none of the three former residents being inducted into the hall.