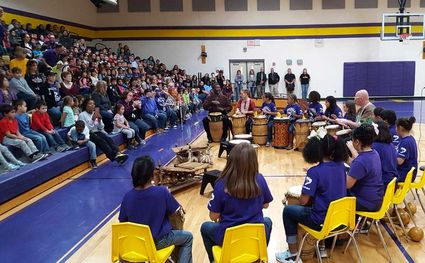 Sowah Mesah, left center, leads his assistant Clare Speer and the Tucumcari Elementary ORFF Ensemble during an African drum performance for the students.

The students of Tucumcari Elementary enjoyed a week of learning about African music, instruments from a visiting professor capping it off with two concert for the school, community.

"I have truly enjoyed this trip to New Mexico," said Sowah Mensah, music professor at McCalister College, Saint Paul, Minnesota. The students, teachers and community have been amazing."

Mensah, a native of Ghanaian West Africa, said he came to Tucumcari with through the efforts led by Tucumcari Elementary Music teacher Andrew Kesten. He said Kesten had attended one of his music workshops during the summer in Kansas City, Kansas.

"Kesten asked me if I would be interested in coming to his school," Mensah said. "I had no idea it was located in New Mexico."

Mensah said before coming to Tucumcari, he had visited all but three states in the country, New Mexico was one of the three. He said not only did he get to cross the state off his list, he was overjoyed by the level of talent of the students member of the Tucumcari Elementary ORFF Ensemble.

"I have visited, taught and performed at schools across the nation for 20 years," Mensah said. "These students were the most advanced that I have ever met."

Mensah said he has never had anyone take his class for one week and have his students so well versed in the music. He said Kesten had requested books and recordings before his visit but he never thought the students would have been so prepared.

Kesten said there were bumps in the road but the children showed a lot of dedication to learning the music.

"It was very difficult, but my favorite part was learning the drums," said Miraqulis Cooper, ORFF member.

Kesten said the students hard work shined through at the school concert on Nov. 9 at Tucumcari Elementary and Friday during a Veteran's Day performance at the Tucumcari Train Depot.

"This was such a rewarding experience for the children, school and community," Kesten said. "I am so thankful that professor Mensah could visit our school."