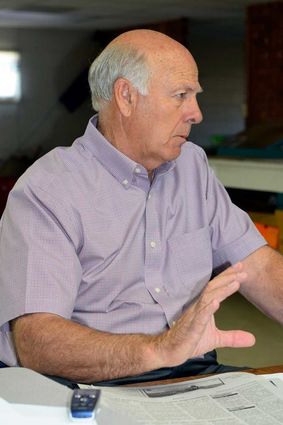 Republican gubernatorial candidate Steve Pearce talked extensively about local and state issues - especially jobs, education, health care - on which he believes he can make an impact if elected.

Pearce was dismissive, however, in discussing state tax reform and President Donald Trump's mounting legal problems. Pearce said he doesn't want to waste his time trying to persuade a Democratic-controlled Legislature on the former, and he says has no control over the latter.

Pearce, a congressman in New Mexico's 2nd District since 2011, sat down for an hour Thursday with two Quay County Sun reporters to talk about a range of regional and state issues. He didn't mention his Democratic gubernatorial opponent, U.S. Rep. Michelle Lujan Grisham, whom he faces in the Nov. 6 general election.

A statewide poll released last week by Emerson College of Boston showed Lujan Grisham holding a small lead over Pearce. Quay County numbers 2,433 registered Republicans and 2,383 Democrats on the voter rolls, according to the county clerk.

New Mexico ranks near the bottom in the U.S. for public education.

Pearce said one reason is teachers are required to do too much.

"The biggest change we need to make in education is to let our teachers teach," he said. "We want them to be behavior counselors, pastors, truancy officers, and that's what's driving a lot of teachers out of the profession. ... We're pushing problems – mental health, drug problems at home, addiction with kids - into the classroom.

"If you pull the problems out of the classrooms, let specialists deal with the problem and let teachers teach, and you're going to get a tremendous amount of focus you don't have right now."

Pearce said he's not a fan of the state's report card for schools but acknowledged a system is needed "where we let parents know what they're getting." But he was critical in general of education evaluation systems, calling them "a club against teachers."

Pearce, born in west Texas but reared by a poor family in Hobbs, said he's a proponent of education because he saw its benefits to his family firsthand.

"One of the things about poverty is you can start kids on a track where they get better pay," he said. "That's ultimately doable. I saw it with my family; Mom was always insistent we go to college, and it proved to be very positive for our family."

Speaking about the Cohen allegations, Pearce said: "I'm hearing both sides and, frankly, we're going to have to let the courts settle it. One side says 'campaign finance violations' and the other side side says there was no violation; he paid the money our of personal (funds). I have no way of knowing that."

Referring to the president's frequent use of Twitter. Pearce remarked he would "run my tweet life different" if he were Trump. But Pearce added he wasn't going to fret over president's legal problems.

"I worry about things I can affect," he said. "He's at 30,000 feet; I'm a ground soldier. You can distract yourself with things you have no ability to affect at all."

Pearce expressed doubt Russia meddling on social media had any effect on the 2016 presidential campaign.

"The idea that somebody spent $100,000 (on Facebook) to affect the national election, it's a little preposterous to me," Pearce said.

Pearce said it wasn't in his nature to talk much about the president much, no matter who it was.

"I'll dust it up with anybody if you're wrong, whether you're Obama or whatever," he said. "But if you look back, I never was one who called for Obama's impeachment. It's just very unproductive ... It's not my way of doing business."

New Mexico lags in employment numbers compared to much of the rest of the country. Pearce said the cost of workers compensation in New Mexico dissuades businesses from locating in the state. Because of that, Pearce favors tort reform.

"You're 66 percent more likely to be hit with a lawsuit in New Mexico than if you're in surrounding states," he said. "You want people to be able to take cases to court and get compensated when things have happened. But we are sort of alone by ourselves in we are a lot more lenient in allowing lawsuits than our neighbors."

"Businesses don't want to come here – it's too hard to get permits, too hard to work with the state," he said. "It's been that way for decades. I think I can reverse it."

Pearce said he would instruct state agencies to hold a "permit day" in various locations around the state to make it more convenient for businesses.

When pointed out that Gov. Susana Martinez, a member of Pearce's political party, has been governor for nearly eight years and did little to address the state's alleged hostility to businesses, he replied his business background would make him more capable to address it than her.

"Her background is not business; her background is prosecution, so she went towards the crime aspect," Pearce said. "Democrats and Republicans both for decades have let it persist, and I think it was because they weren't business-oriented."

Among Pearce's other ideas for boosting New Mexico's economy:

n Securing an agreement with the Secretary of Agriculture to allow the thinning of trees on U.S. Forest Service land. Pearce said that would reopen sawmills.

• Laying down high-speed internet lines throughout the state. which would make New Mexico more attractive for high-tech jobs.

• Toll roads in the oil and gas-producing areas that would funnel big trucks off the interstates.

• More nature trails. "People are looking for trails where they can get out and find nature, get out of the big city," he said.

Though he made his fortune in the oil business, Pearce said it's time New Mexico diversified its economy so state government's coffers are not so dependent on that sector.

"We cannot continue to run a state that's 35 to 40 percent dependent on oil. It's too volatile," he said.

Pearce said he also favors right-to-work - which prohibits union security agreements between employers and unions - to improve the state's business climate. He advocated that voters in individual counties decide on the issue.

"I think we can take a balanced look at it and let the counties choose," he said.

Tax reform, particularly with the gross-receipts tax, has been discussed in the Legislature in recent years. But Pearce said it's not a priority for him.

"We've got to get the jobs first," he said. "Tax reform is not going to do that. Tax reform ... I'd do it, but the chance of the Legislature and me agreeing on tax reform is not too good. And I don't like to waste time."

Pearce said he would keep Gov. Martinez's expansion of Medicaid in the wake of the federal Affordable Care Act's passage, with one change: "If you're on Medicaid and you're able-bodied working age without kids, then you'll have a work requirement," he said. "We're not going to let people waste lives, drifting around and not having the courage

to get back in the workforce. So to get your benefits, you'll have to go to work. We want to encourage people to re-find the dignity of work. There's nothing more powerful than earned success."

When asked the work requirements, Pearce suggested 20 to 30 hours a week, but added "we'll take a look at it" for a final number.

Pearce, a Vietnam veteran, said he's closely watching the Veterans Administration's new "choice" program that allows veterans who live more than 40 miles from a VA clinic to use local health providers instead.

"You'll make your local providers a little bit stronger because you have more patients coming there instead of sending them to Albuquerque or Amarillo," he said.

Pearce also advocated consumers shopping for health insurance across state lines. He said rates are cheaper in neighboring Texas. Pearce said rollbacks of onerous rules in the AFA, known as Obamacare, should strengthen small hospitals. He said too much money in health care is concentrated in urban areas by corporations. He said big hospitals liked the law because it crowded out rural competition. "Big, out-of-state institutions are not concerned with the people. They're concerned with rate of return," he said. "I would see to it that rural health care is as supported as urban hospitals.

"Very few issues in Washington or in Santa Fe are Democrat vs. Republican. They almost all are big vs. small," he added. "I don't like our business being conducted from Atlanta or Brussels or anywhere else. Let small businesses thrive. If we let the big people own everything, we're not going to have any economy in rural New Mexico."

Pearce said he advocates preventative care, including for mental health, as a way to ultimately lower health costs. He also said treating mental illness and addiction problems with lower the crime rate.

"If we treat the problems instead of throwing people in jail and in prisons, we're going to have the dollars (be more) effective. We're going to bring the mental-health dollars that used to come rurally," he said.

When asked where the money for mental-health and addiction care would come from, he said the reduction of the prisoner population from such programs would free up money.

"Let's say you quit recycling 20 percent of your prisoners," he said. "That's 20 percent of (the money) that can be used for mental-health and drug-abuse (programs)."