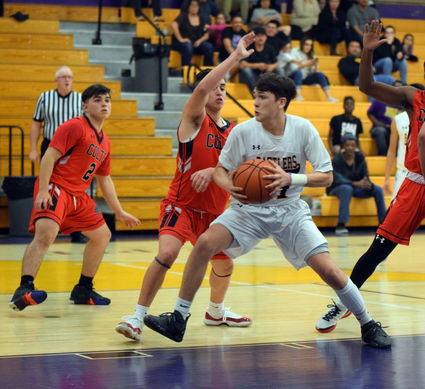 Tucumcari's Jesus Ramos makes a strong move to the basket against two New Mexico Military Institute defenders during a game Feb. 5 at the Snake Pit.

The Tucumcari boys basketball team scored the last 12 points of the game to secure a 51-34 victory over New Mexico Military Institute in the district opener Feb. 5 for both teams at the Snake Pit.

The Rattlers (3-15) snapped a nine-game losing streak by notching their first victory since Dec. 21. Jesus Ramos scored 20 points, including 11 in the critical fourth quarter, to lead Tucumcari. Jaxon Arguello added 10 points for the Rattlers.

The Rattlers again struggled from the free-throw line, making 13 of 34 shots (38 percent). That included six misses in a row late in the fourth quarter. Luckily for Tucumcari, the Colts also performed badly from the foul line, going 6-for-21 (29 percent).

Tucumcari coach John Span was happy with his team's effort and play-making down the stretch but remained frustrated with its free throws.

"That's terrible," he said when told about his team's stats from the foul line. "As many free throws as we shoot in practice, I don't understand it. I'll say this again: We got the people at the line I want at the line."

"We definitely made a some mistakes we need to correct going into the rest of the district, for sure," he said. "We gave a good effort, but it wasn't enough."

Both teams struggled offensively in the first half, with the Rattlers holding a 14-12 lead at intermission.

Tucumcari briefly surged to a double-digit lead in the third quarter with four 3-point shots, including two by Ramos.

The Rattlers never lost their hold on the lead in the fourth quarter but came close because of their free-throw troubles. NMMI scored on a driving basket that would have cut Tucumcari's lead to 40-36 with less than three minutes left, but officials waved off the score with a delayed charging call.

"Our defense was pretty good in the first half," Span said. "In the second half, they'd fake like they were going to shoot the ball outside, we'd come up and they'd go right by us to the basket. I told them to stay down under the basketball and box out."

With the ball, the Rattlers managed to run off some time. Ramos then scored on a driving move to the basket and was fouled with 31.4 seconds left. He made the free throw to give Tucumcari a 43-34 lead.

Span said the 6-foot-1 freshman possesses a lot of ability that needs refinement.

"He's the one I put up top because he can create a shot for himself," he said of Ramos. "But at times, he creates shots for others. There was a time where he was caught up in the air, instead of passing it to an open person, he throws it up at the basket. I can't have that; he's got to make good decisions."

Ramos scored twice more with slashing moves to the basket, and TJ Lampkin made four foul shots in the final 21 seconds to ice the game.

Tularosa's Josh Chavez made nine of 11 3-point attempts for 27 points to power his team over Tucumcari during a district game Friday.

"It didn't matter whether we were in his face or not," Span said. "I don't think he could do that again."

Span said he instructed his Rattlers to defensively lock down Anthony Betancur, Patrick Hooten and Chavez. They succeeded on stifling two of the three, but Chavez wound up having a career day.

The Wildcats led 30-21 at halftime. Tucumcari narrowed the gap to six points during the second half but came no closer.

Even with the loss, Tucumcari remained in the district-title hunt, as New Mexico Military Institute, Tularosa and Dexter each also have suffered one loss - resulting in a four-way tie for first place.