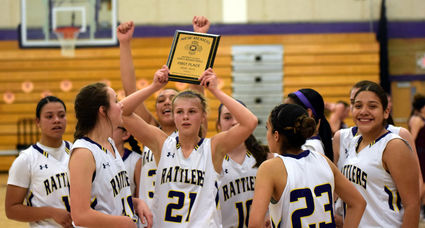 Tucumcari junior guard Ashley Shipley holds up the district-champions plaque after she and her teammates defeated Tularosa 78-34 on Friday at the Snake Pit.

The Tucumcari girls basketball team scored 21 unanswered points in the third quarter to turn a close game into a 78-34 blowout of Tularosa at the Snake Pit as the Lady Rattlers captured the Class 3A, District 4 tournament title Friday.

Tucumcari, winners of 14 straight to improve to 21-4 overall, captured the No. 3 seed for the Class 3A state tournament and faces Cuba (12-11) in the first round at 6 p.m. Friday at the Snake Pit. The winner of that game will play the winner of the Tularosa-Sandia Prep game March 12 at the Santa Ana Star Center in Rio Rancho.

Robertson (25-2), which Tucumcari defeated 39-36 in overtime Jan. 26, is the No. 1 seed, while Santa Fe Indian (24-4) is seeded second. The March 14 semifinals will be at the Santa Ana Star Center and the March 15 final will be at the Dreamstyle Arena, aka The Pit, in Albuquerque.

Jasmine Jones scored 16 of her game-high 24 points in the first half for the Lady Rattlers. Ashley Shipley added 19 points and Kalani French 16 as Tucumcari burned Tularosa with eight shots from behind the 3-point line.

After the Lady Rattlers were presented with their district-championship plaque and cut down one of the nets, coach Gary Hittson was rendered almost speechless with his team's performance.

"These girls are amazing, just amazing, in what they can do," he said.

Tularosa, 17-9 and ranked seventh in Class 3A by MaxPreps.com, was led by Shacie Merr's 12 points.

As for Tularosa coach Johnny Hudson, he said he felt the same uncomfortable sense of deja vu from when his team played the Lady Rattlers during an 86-50 loss Feb. 9 at the Snake Pit – a close game at halftime that essentially was over by the end of the third period.

"It was the same deal, ditto," he said. "Boom - it blows up on us in the third quarter. We're giving them too many good-look threes, and they're getting into the lane too easily, we're fouling, and they're making free throws. Our defense has to be better."

Despite Tucumcari's robust points total, the Lady Rattlers started slowly. Tularosa briefly led 6-0, and Tucumcari missed several shots close to the basket. Jones helped keep her team afloat with a strong inside game to fuel a 17-2 run in the first quarter.

"I think she's the best post player in 3A basketball," Hittson said of Jones.

Tucumcari senior guard Aliyah Herrera also twisted her ankle while forcing a turnover midway through the second quarter. She returned in the third period after receiving treatment in the trainer's room but was played sparingly the rest of the game.

"She's going to ice it, rest it this weekend and probably get the day off from practice on Monday," Hittson said.

Tularosa trailed 28-20 at intermission and scored the first two baskets of the third quarter to close the gap to 28-24.

Tucumcari blitzed the Wildcats with three unanswered 3-pointers – two by freshman Reece Goldston and one by French – to suddenly give the Lady Rattlers a 37-24 lead. Tularosa called timeout with 5:52 left in the period.

The hits kept coming against the Wildcats. Shipley scored several times on drives to the hoop, Herrera hit a 3-pointer and scored on a fastbreak, and Aaliyah Brown scored in transition for make it 49-24.

"We got to where we were standing and not moving," Hudson said. "And we had too many turnovers, too. We just didn't take care of the ball at a high level."

Tucumcari ballooned its lead by 30 at the end of the third quarter and led by more than 40 late in the game, despite Hittson's liberal substituting of his starters.