Occupants of crashed car taken into custody; at least one shot at officers 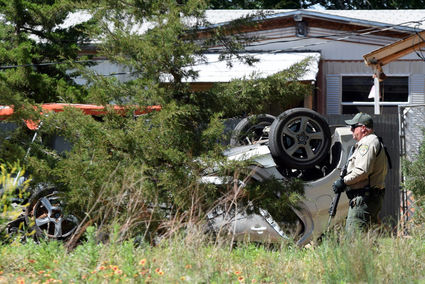 Quay County Sheriff Russell Shafer looks over a crashed car at Maple Avenue and Second Street in Tucumcari on Tuesday afternoon after a high-speed chase in which one of the vehicle's occupants shot at officers after the crash.

Two occupants of a crashed vehicle were taken into custody without further injury after a two-hour standoff Tuesday afternoon in the wake of a high-speed chase where one of the subjects shot at officers in a north Tucumcari neighborhood.