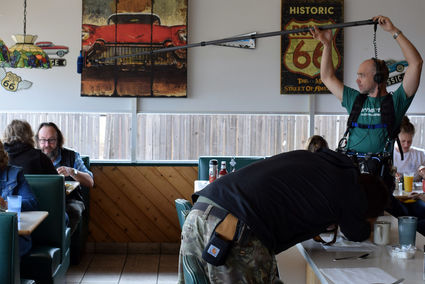 A British Broadcasting Corporation crew member lowers a boom microphone towards Si King and Dave Myers, better known in England as The Hairy Bikers television hosts, as a cameraman in the foreground works to find a good angle Wednesday at the Kix on 66 restaurant in Tucumcari. The Hairy Bikers have spent several weeks on Route 66 to produce a six-part series about the historic highway for BBC Two.

A crew from the British Broadcasting Corp. spent about 12 hours in Tucumcari last week filming at two Route 66 restaurants for a pair of longtime television hosts.

The crew spent the evening of May 28 eating at Cornerstone First Edition Pizza and...