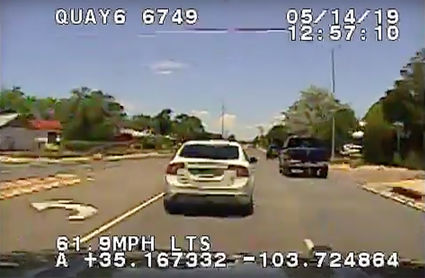 A screenshot from a Quay County deputy's dashcam video shows a Volvo S60 being pursued on South First Street in Tucumcari on May 14. The two people in the Volvo later were arrested after it crashed and one of its occupants shot at arriving officers.

A high-speed police chase that went through the heart of Tucumcari last month would have been ordered terminated by the county sheriff if the suspects' car had turned onto a residential street.

However, the chase continued on a north-south artery...